Disney is defending the host of a new “Star Wars” web series amid backlash to tweets some deemed to be racist toward White people.

Krystina Arielle announced this month that she will host “The High Republic Show,” a web series offering news and insights into the latest multimedia subseries of the immensely popular science fiction franchise.

However, shortly after announcing Arielle as the host of the new bi-monthly show, some combed through her past tweets and found several that spoke in somewhat harsh terms about White people’s role in dismantling racism.

The backlash got so bad that it prompted the official “Star Wars” Twitter account to issue a statement defending the host and denouncing “bullying and racism.”

“Our Star Wars community is one of hope and inclusivity. We do not stand for bullying and racism. We support @KrystinaArielle,” the tweet reads.

Hours later, Arielle took to Twitter to share some of the virulent and racist responses she was getting in light of the old tweets. Screencaps of comments, tweets, emails and more show people saying she was only hired by the Disney-owned franchise because of the color of her skin, sending her emojis of monkeys and calling on people to harass her even more for her views on race in America.

“You deserve all the hate you’re getting,” one chilling post reads.

Airelle, however, seems to be taking the hatred in stride. She captioned the images with a tweet reading, “We the last 24 hours have been … not the greatest.”

She then shared the poem “Still I Rise” by Maya Angelou. 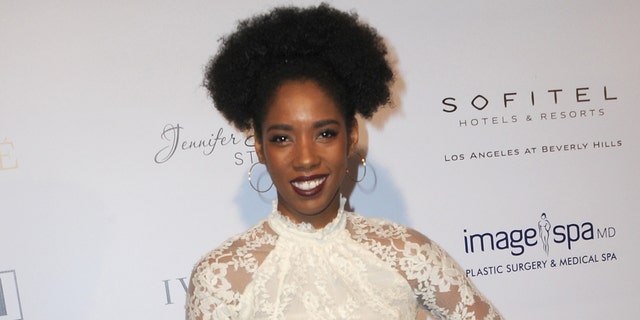 Like many, Arielle was outspoken about race over the summer as the nation grappled with protests sparked by the death of George Floyd at the hands of police in May. Several tweets she shared over the summer call out White people for what she believes are performative acts of solidarity.

“Just a reminder that White Women are just as complicit in the upholding and enforcing White Supremacy,” she wrote over an Axios article about Kayleigh McEnany defending the use of the term “Kung flu” to describe the coronavirus.

“You do not have to comment under every post about racism that you’re trying to be better’. ‘Have read x,y,z.’ Any combination of ugh white people, when you are white people. I do not care. Talk is cheap. I’m not here for your accountability check ups,” she wrote in a separate tweet in June.

“Watching two white men discuss racism they will never experience will never sit right with me. #Debates2020,” she wrote.

She continued in a follow-up tweet: “White men: this is not the subject for you to try and speak authoritatively in my comments. I said what I said.”