Wednesday marked a rare sighting for Derek Jeter’s children as the legendary New York Yankees shortstop’s kids – along with his wife Hannah Jeter – showed their support for Jeter while he was enshrined into the National Baseball Hall of Fame.

Sports Illustrated Swimsuit model Hannah, 31, and the couple’s two daughters, Story Grey, 1, and Bella Raine, 3, accompanied the partial owner of the Miami Marlins as he saw his name and famous No. 2 immortalized in baseball history.

For the star-studded occasion, the pair’s kids donned matching pastel blue and white dresses, along with white bows in their hair, and wore identical patterned face masks. The event also saw appearances by the likes of Patrick Ewing, Ahmad Rashad, CC Sabathia and Michael Jordan – whom Jeter, 47, has been best buddies with since 1994.

Jeter and Hannah married in 2016 and are notorious for keeping an otherwise low profile at all times, especially for their daughters whose images had never seen the light of day on their social media. 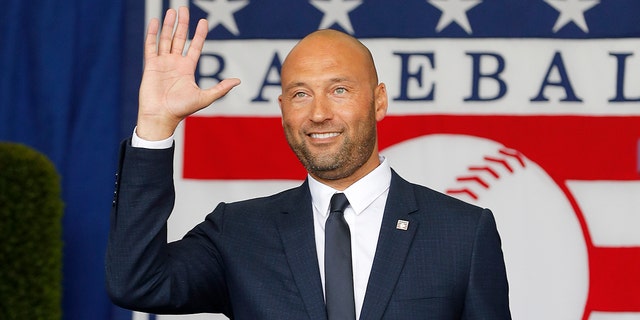 Derek Jeter is introduced during the Baseball Hall of Fame induction ceremony at Clark Sports Center on September 08, 2021 in Cooperstown, New York.
(Photo by Jim McIsaac)

“I know it’s necessary in my industry, and I absolutely have to when it’s part of a contract,” she said. “But a lot of people post their children and husbands, and for me that will never be the case.”

The model went on to say that given the fact she and Jeter have essentially devoted their lives to the spotlight through their professions, doing so on such a consistent basis created the longing for privacy for their daughters.

“Both my husband and I have been in a place in our careers where we have to share so much. And we can handle it,” she said. “But when you love something so much, you want to protect it more than anything in the world. And for me, that’s my relationship, that’s my kids.” 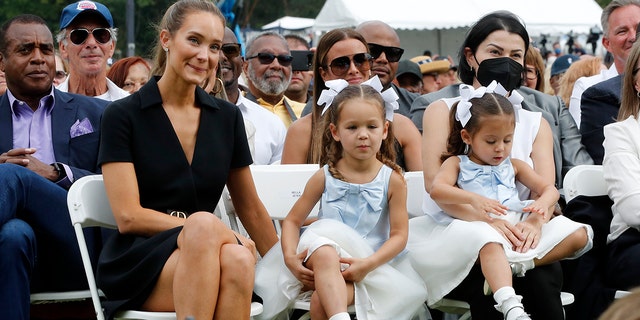 Derek Jeter and Hannah Jeter’s two daughters, Story Grey, 1, and Bella Raine, 3, made a rare public appearance at his enshrinement into the National Baseball Hall of Fame.
(Photo by Jim McIsaac)

She maintained in the interview that even during her pregnancies, she still preferred her privacy when she gained weight and “went into hiding.”

“I always thought, ‘You know, I’m going to have kids and go right back to work and pop back into shape,’ and it’s not that easy,” she said at the time, adding that she has been following an intermittent fasting diet, which gives her more energy.

Jeter – who donned Yankees pinstripes for 20 years – is the 28th individual to be inducted into the National Baseball Hall of Fame.

Reps for Jeter did not immediately respond to Fox News’ request for comment.