Demi Lovato’s ex-fiancé, Max Ehrich, is not impressed by her recent mention of their failed engagement at the 2020 People’s Choice Awards last weekend.

After Lovato shared a photo of her blonde, partially-shaved new haircut, Ehrich commented on the post.

“Exploiting our breakup for clout at PCA is not chill,” he wrote in one comment late Thursday night. “Stop talking about me on award show. thanks.”

Lovato’s fans quickly defended her in the comments, noting that it’s been Ehrich, not Lovato, who has been very public on social media about their split. 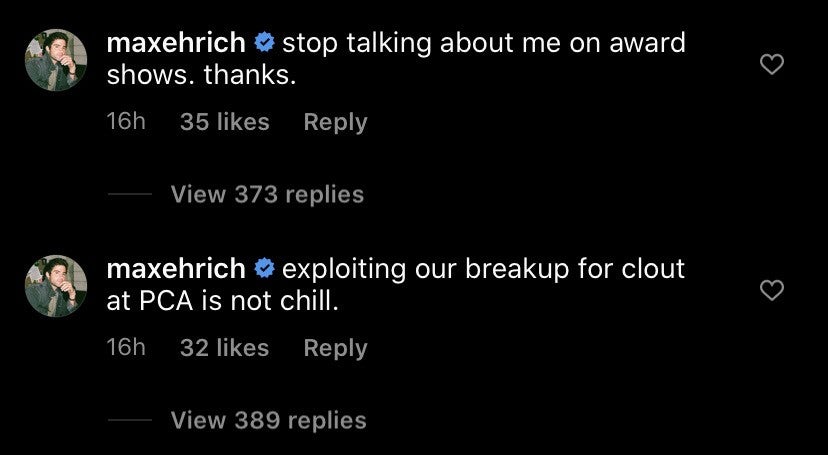 Lovato, 28, and Ehrich, 29, began dating in March and got engaged a few months later in July. Two months after that, they split with Ehrich claiming he found out about the end of their relationship from a tabloid.

At Sunday’s People’s Choice Awards, Lovato briefly brought up their split while hosting the virtual show.

Referencing the coronavirus pandemic, Lovato joked, “I did what everyone else did, I went into lockdown mode, and got engaged. I got into painting, photography, meditation, tested the limits of Postmates unlimited. Also, I didn’t know this could happen, but reached the end of Instagram four times. I binged seven seasons of Pretty Little Liars, got unengaged, then went looking for aliens in the desert.”

Apart from this mention, Lovato hasn’t spoken publicly about her split. Shortly after the split she released the song “Still Have Me,” which many fans thought might be about the breakup.

Ehrich also released the song “Afraid” shortly after their split. The single is about being afraid to give into love.