EXCLUSIVE:Claire Foy, who won two Emmy awards when she ascended to The Crown as Britain’s Queen Elizabeth II,is having none of it,sympathy that is, for Margaret Campbell, Duchess of Argyll, a society beauty,whom she portrays,to the manner born,in the BBC1/Amazon Prime mini-series A Very British Scandal which replayed the socialite’s scandalous 1963 divorce case from her husband Ian Campbell, the  11th Duke of Argyll, played as a rum sort of aristocrat  by Paul Bettany.

Unfairly,or not, Margaret was labelled as The Duchess of Debauchery.The case was the Amber Heard-Johnny Depp court case of its day,with bells on- it certainly matches it for notoriety. Fascinating to view A Very British Scandal a second time with the antics of the Heard-Depp trial at the back of one’s mind.

I used to see the Duchess around and about the London nightclub scene back in the 1980s. By then she was on her uppers and sought sustenance from the canapés and buffets set out at the parties,a lot of us did.I felt sorry for her.

Foy agrees that ,from the outside,Margaret’s later life looked “pretty upsetting and heartbreaking”. She was estranged from her family and died penniless aged 80 in 1993.

However, Foy has little patience for the Duchess. “I think it’s very easy to say,Oh,poor you,and have symphony for someone who doesn’t necessarily want it.”

It’s not like the Duchess was a model person, she says.She had little consideration of other human beings “and she definitely caused a lot of harm and hurt to a lot of people … she was very naive, she was very childlike.She wasn’t doing it to go out of her way to maliciously hurt people,she was naive and when you look at her in that way, then you end up having sort of empathy for her and going,Oh,bless her.She doesn’t really know how to conduct a normal relationship really,or be an adult in the world,”she says looking mildly disgusted.

It took her a while to like the Duchess,even a little bit.“My big thing was her privilege and also her dislike of other women,” she says gritting her teeth.“I was like,Margaret! I’m getting there …I am trying.” 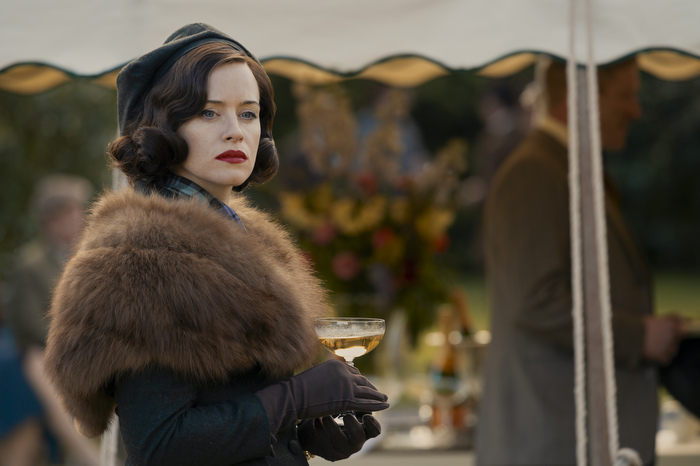 Foy softens and admits that for all her advantages as the debutante daughter of a textile millionaire, Margaret did not always have an easy life.The relationship with her mother was strained and “she had multiple miscarriages;multiple near-death experiences ,oh,and she lived through the war.”Foy mentions the moment in the drama when the Duchess says she’s going to buy a baby,and her gander is up. “Because to her,she could buy anything,” she says,sniffly.

Her voice changes to a haughty tone, and it’s uncannily like the Duchess’s. “There must be people who need the money …and if they had a baby why wouldn’t they sell it to me!”

Back as Foy she sighs.”Oh, dear lord,You have absolutely no concept of how life works or what it must be like to be someone who can’t afford to go and buy a mink.”

The Argyll divorce case transfixed the Britain of the 1960s.There was a photograph of a so-called headless, naked man with the Duchess also disrobed except for a signature string of pearls. Oh,how the masses lapped it up.The presiding judge, Lord Wheatley called it a “gross form of a sexual relationship” and proceeded to excoriate her in a 65,000 word summary saying the evidence showed she was a “completely promiscuous woman whose sexual appetite could only be satisfied with a number of men.” The Duke believed  his wife had extramarital affairs with 88 chaps.

“It wasn’t like she was a model person,but who is?”,asks Foy.

However, the Duchess wasn’t on trial for having sex with lots of men, as much as the judge, and the public, probably would have liked at that time,says Foy.

She mentions that she’s been listening to the  BBC podcast Unreal: A Critical History of Reality TV by Pandora Sykes and Sirin Kale who say that the days of gladiatorial meanness of by Simon Cowell-like ,X-Factor-type judges attacking vulnerable people on television are gone now.Replaced by shows where people are kind to each other,apparently.

“I think that’s true,” Foy says.”But I also think there is so much repressed hatred and anger, and like, judgement.I think we see it very clearly all the time …that level of judgement is still very much around,it’s just done in a different way and by different people,than maybe a judge.”

I comment on how,back in the 1960s,in the U.K, at least,neighbours would meet at the garden fence to chew over the scandal of the day.That’s social media now, says Foy. “Social media is a billion people looking over the garden fence,”she says,as if in shock.

The social media scene not one for her,thanks very much,though she appreciates that for “incredibly famous people”, social media cuts out the middle-man and is a way of talking directly to people. ”I don’t know,because I’m not on it,” she reiterates.”

“I’d be terrible.I know that it’s great for business and all that;all the good things are great but to me the bad things outweigh that.And I think at some point we’re going to have a medical advisory thing on it,’ she says.

She throws her hands up and admits that she misses so many things not being active on Twitter and the rest.“I miss so much because I’m not on it! Like words that are now used everyday or like whole social movements pass me by because this is happening in a virtual world.”

Wordle is a word she’s heard of but she has no clue what it is.

I ask her about her views on fame and mention the response Meryl Streep gave when I asked her the same question a long time ago.”We all go to the bathroom,” Streep had said.

“I think I would really be in denial if I didn’t know that I was, to some people, recognizable, but most people could give two shits.They don’t.There’s a real difference between Tom Cruise and the rest of us,basically,” she says,unable to hold back a fit of the giggles.

She takes none of it seriously.Even so, I persist in wanting to know the moment she knew she was famous.Was it the first time she went to the Golden Globes in 2017 amid much fanfare for The Crown, in which she portrayed Her Majesty Queen Elizabeth in the show’s first two seasons? “It was like living in a different world,” she recalls of being in Hollywood for the Globes ceremony. 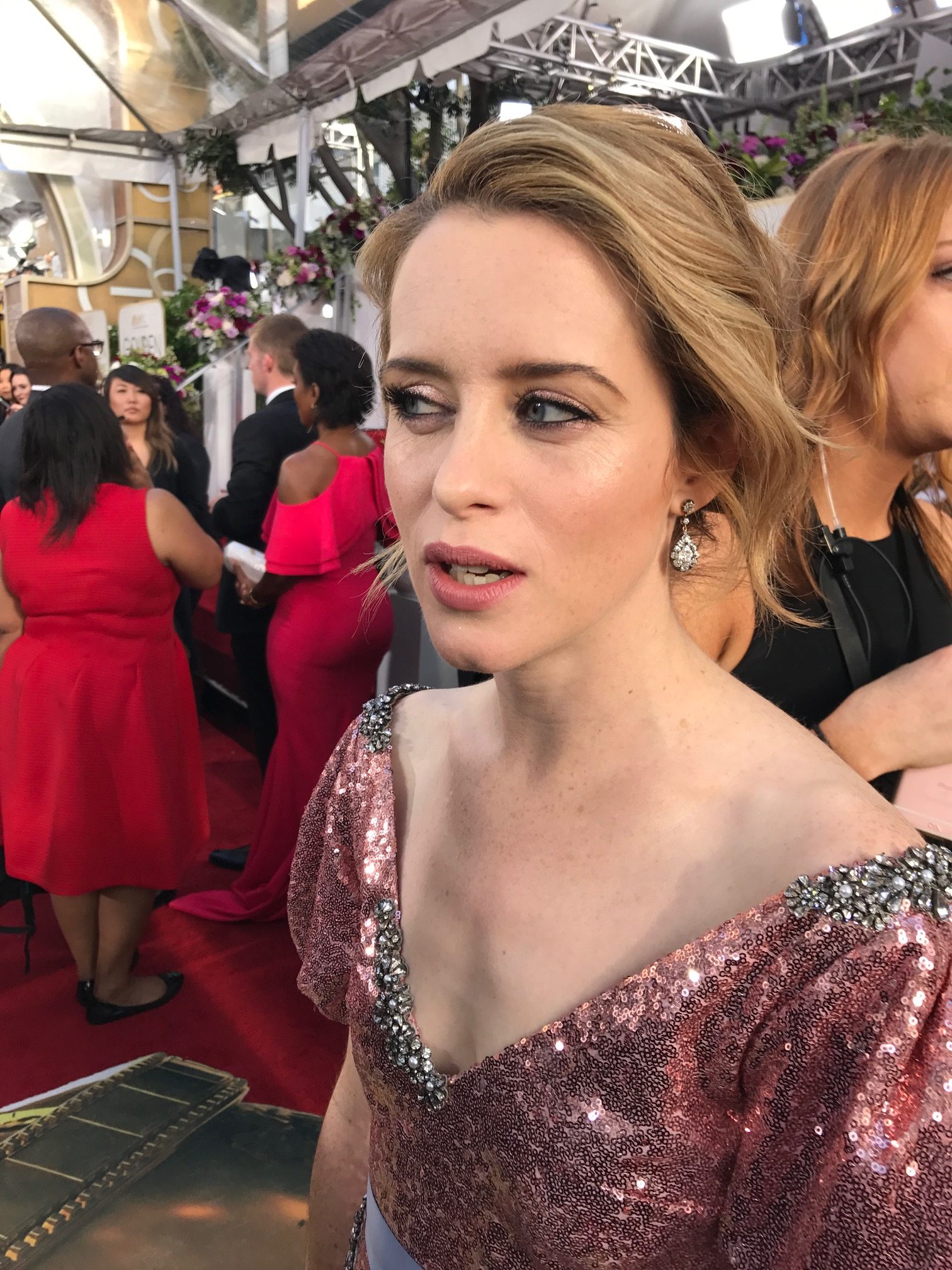 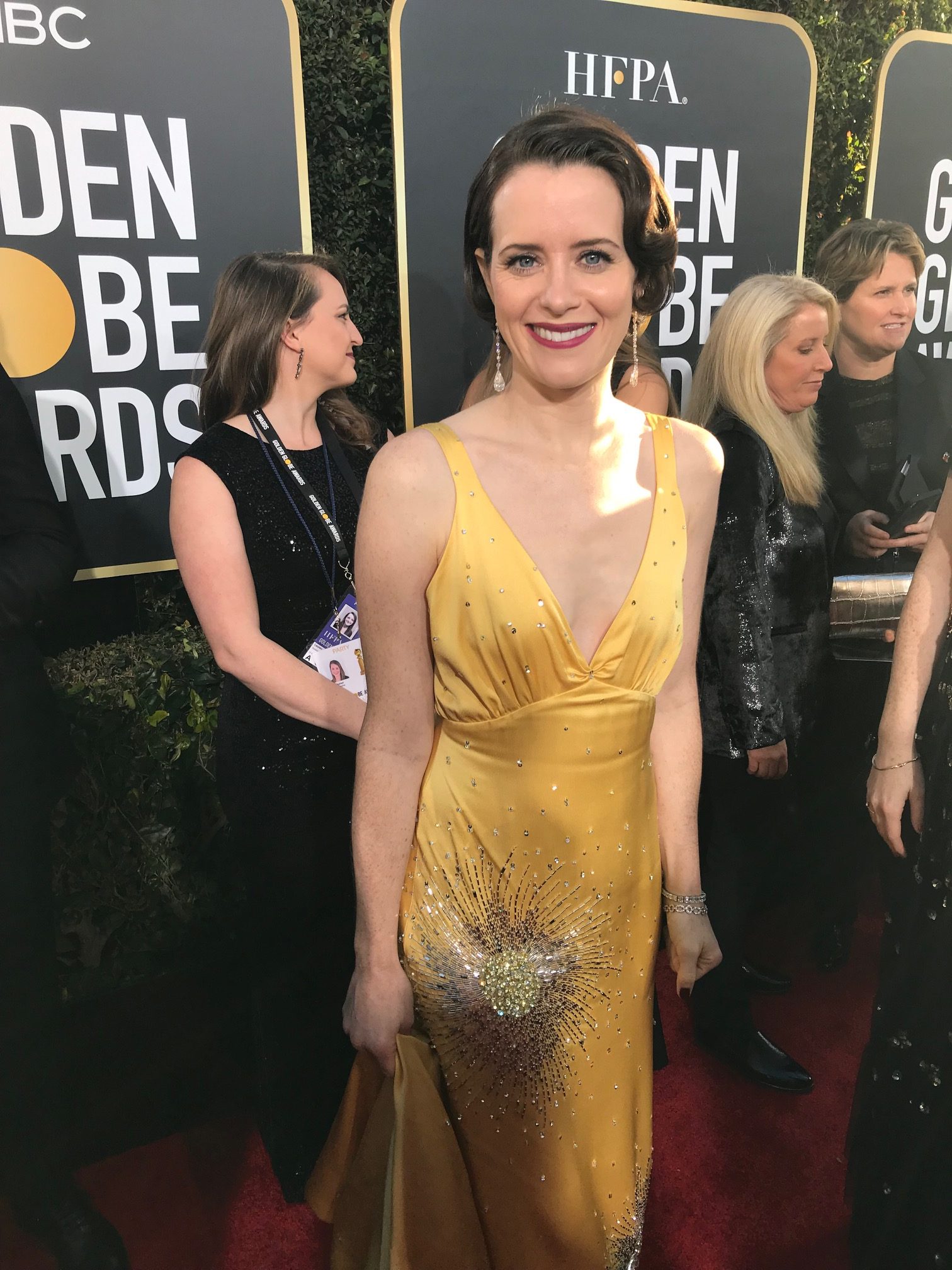 “I was in LA, that’s a different world,and I was jet-lagged… it was bonkers,it was suddenly being inside a world that you’d looked on the outside of for a ling time,and you were suddenly in the middle of it, like living in a reality game.It was really hard to get your head around it.And sort of a bit scary,so that was weird.”

There are countless reasons why she might accept an acting role. It could be the director; the script,the other actors who are in it,the director of photography. “There is also the other reason which is the money.You do it because you need the money. You’re very lucky if you’re an actor,very lucky, where you don’t have to do a job because of the moment and I think that’s something you’ve always got to remember because that’s a really privilege position to be in.When I first started I literally would have done anything.The idea that I could make money out of acting was insane to me.There was always a fear,the genuine fear of,I’ve done this now, but what’s next?”

Her earliest roles were in the theater and she supplemented her stage income with all manner of part-time employment from working in a hat shop to working in a call-center having to flog currency calculators.”I’ve done everything,I think,apart from anything in the  medical profession,” she says.

We’re into finance so I bring up the stir that erupted when it emerged that she was paid less on The Crown, than Matt Smith, who portrayed Prince Philip,the Queen’s husband.

It was a painful education for her,she says.”I had suspected for a very long time about every job I’d done,” that she hadn’t enjoyed parity over pay.

“I think most female actors do as well.There’s that situation where you’re so grateful for the job but at some point you notice the bias…you know there’s no equal pay going on and it’s too painful to think about, genuinely it’s painful because you don’t want to think about what other people think of your worth;because it’s embarrassing,isn’t it? To have it reinforced to you that someone’s saying you’re not worth the same as someone else or you’re worthless to us,” Foy explains.

Some good  emerged out of that painful time,she says.”I’ve spoken to my agents about it and the thing that has come out of it is the transparency of pay.It’s knowing those figures have to be discussed.They weren’t for a long time.I think there’s a lot more transparency now which I think is great for the industry.I have spoken to many women who have said,my pay has been doubled, and stuff like that.It’s only a good thing really,” she adds.

She says that “it’s like the dial has really shifted” in terms of opportunities for women and for people of different- diverse- backgrounds.”You can’t have equality of pay unless the opportunity’s there.”

Foy believes that A Very British Scandal  would have lacked authenticity if it hadn’t been written by a woman,Sarah Phelps, and directed by a woman,Anne Sewitsky.

She has worked on many projects which have had male directors.”It’s not necessarily a male-female thing,it’s an actor-director thing and I think it’s that thing of conversations need to be had and I want them.”

Foy appears in Sarah Pollen’s film adaptation of Miriam Toews’s 2018 novel Women Talking with Jessie Buckley,Frances McDormand,Rooney Mara; and Ben Whishaw playing one of the few blokes in it.

Foy’s proud of of the film set in a Mennonite religious community. “I play a viscerally angry woman which was great.She’s pretty much hell hath no fury like a woman,annoyed.”

She’s on board Doomsday Machine, a limited series about Facebook, in which she’ll portray Sheryl Sandberg,Facebook’s Chief Operating Officer. “It’s very much in pre-pre-production,” says Foy.

Yes, she did watch the Queen take tea and marmalade sandwiches with Paddington Bear in the now famous two-minute film shot for the monarch’s Platinum Jubilee celebrations by BBC Studios and Heyday Films/Studiocanal.

“It’s so cute.I love Paddington.Ben Whishaw as Paddington brings me such joy and happiness,”she says.

The film,she says,“sort of encapsulates something British – that sensibility ,which is a bygone era,I suppose,where a joke could just be like a sweet little thing as opposed to some monstrous,I dunno,you know.

“Well done her (the Queen).Good on her.”