Although the ‘Bring the Funny’ judge has issued a public apology to Courtney Stodden for her past tweets, the luxury department store chain has dropped out of signing a contract with her.

AceShowbiz -Bosses at top U.S. department store Bloomingdales have pulled out of a deal with Chrissy Teigen following her cyberbullying scandal.

Chrissy was recently accused by Courtney Stodden of telling the non-binary model to kill themselves in private Twitter messages sent when Stodden was 16.

Teigen has since issued a public apology for her actions, but in response to the scandal executives at luxury department store chain Bloomingdales have dropped out of signing a contract with Chrissy. A source told Page Six, “They pretty much had it together… but had to cancel it.”

In their original claims, 26-year-old Courtney said Chrissy dished out hateful messages on social media, both publicly and privately, after the model and Internet personality shot to fame in 2011 after marrying “The Green Mile” star Doug Hutchison.

“[Chrissy] wouldn’t just publicly tweet about wanting me to take ‘a dirt nap’ but would privately DM me and tell me to kill myself,” Stodden said. “Things like, ‘I can’t wait for you to die’.”

Chrissy did not deny the claims and instead said she feels “lucky” to be “held accountable” for her past actions.

“I’m mortified and sad at who I used to be,” she said. “I was an insecure, attention seeking troll. I am ashamed and completely embarrassed at my behavior but that… is nothing compared to how I made Courtney feel… These were not my only mistakes and surely won’t be my last as hard as I try but god I will try!!” 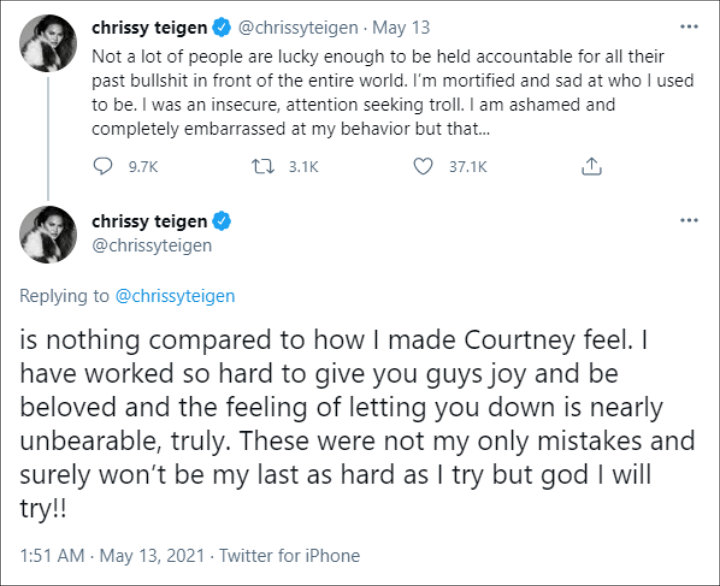 Chrissy Teigen apologized for past remarks about Courtney Stodden.

Days afterwards, Chrissy was spotted enjoying a family trip to Disneyland in California with husband John Legend and two children, Luna and Miles. Keeping a low profile, she hid behind blue baseball hat and gray face mask. She wore a light blue jacket, black leggings and white sneakers. Her bag was slung over her shoulder, and her white sweater was tied around her waist.