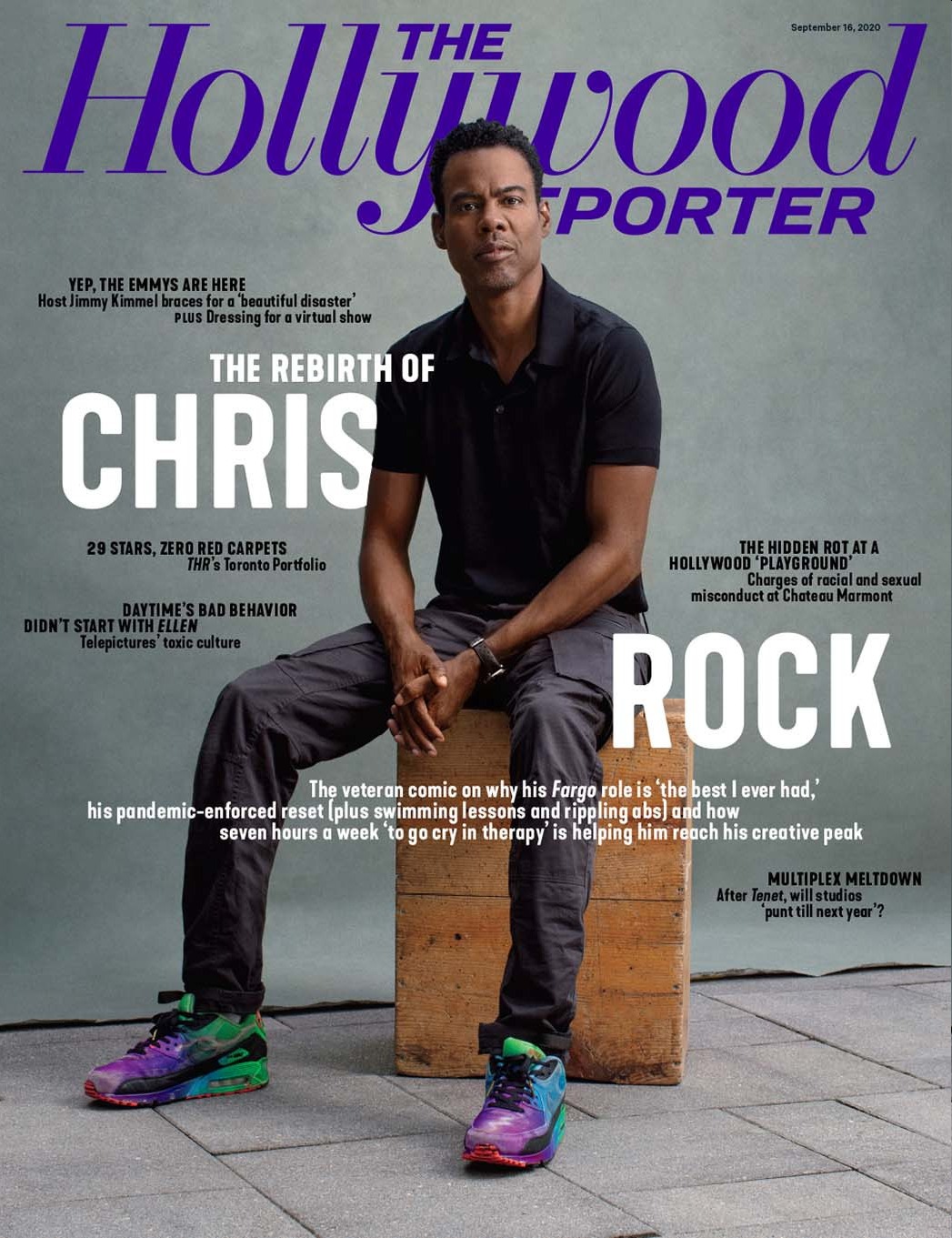 Maybe I’m misremembering, but didn’t Fargo Season 3 kind of suck? That was the season starring Ewan McGregor. I honestly don’t even think I finished watching it. But seasons 1& 2 were amazing, and I have high hopes for season 4, starring Chris Rock. Rock covers the latest issue of the Hollywood Reporter to promote the new season, which he calls “the best part I’ve ever had.” Rock is 55 years old now – still creative, still making all kinds of deals, still striving for excellence, but now he’s a bit battered and bruised. His divorce took a massive toll and he’s in intensive therapy to deal with a lot of different things. You can read the Hollywood Reporter piece here. Some highlights:

On Fargo: Great parts “are like great loves,” he tells me, “you get two, three if you’re lucky… This is the best part I’ve ever had. Sometimes you get a great love and you’re just not ready for it,” he says, citing one of his early roles opposite Morgan Freeman in the 2000 dark comedy Nurse Betty. “Great part, and I wasn’t f–king ready. Now, Don Cheadle would’ve been. You ever seen Don Cheadle in Devil in a Blue Dress? That motherf–ker was ready.”

His career in his 20s: “I had this great combination of big ego and low self-esteem.And the ego gets you out onstage, but the low self-esteem is the thing that makes you practice so much because you don’t believe in yourself at all. You think you’re a total f–king fraud — and you don’t think anybody could love you for being you, so you have to be good at this thing.”

He was driven by fear for decades: “It just depletes you. I had to let it go. I was just dying, dude.”

The pain of his childhood: “I’m not belittling today’s youth, but I wish somebody had sent me a bad text when I was a kid. These motherf–kers were trying to kill me.”

He loved the “reset” aspect of the pandemic: “What people don’t realize is that athletes get that time. and you can’t obtain greatness without the time to rest and work on yourself and your faults.”

He recently learned how to swim: “Do you know how f–king hard it is for a grown-up to learn how to swim? You’ve got to not be scared to die. The other day, this guy says to me, ‘OK, you’re going to dive into the deep end and swim to the other side,’ and I’m like, ‘Are you f–king crazy?’ But then I dove into the deep end and I swam to the other side, and it’s a metaphor for what I’ve been trying to do during this time.”

He does seven hours of therapy a week: His decision to seek meaningful help for the first time in his life was precipitated by a friend’s suggestion that he may have Asperger’s. It prompted a nine-hour battery of cognitive tests earlier this year, from which doctors diagnosed Rock with a condition called nonverbal learning disorder, or NVLD. As he’s come to understand it, he has tremendous difficulty with non-verbal signals — which doesn’t sound too drastic until, as he explains, you consider that some 80 percent of communication is nonverbal. “And all I understand are the words… By the way, all of those things are really great for writing jokes — they’re just not great for one-on-one relationships,” he says. Until now, it’s made much of Rock’s life uncomfortable. “And I’d always just chalked it up to being famous. Any time someone would respond to me in a negative way, I’d think, ‘Whatever, they’re responding to something that has to do with who they think I am.’ Now, I’m realizing it was me. A lot of it was me.”

On his friend Jimmy Fallon doing blackface in a 2000 skit: Rock says he doesn’t remember seeing it at the time and writes it off as just “bad comedy.” Fallon “doesn’t have a racist bone in his body,” he says, adding that he called his old friend after he issued a public apology to tell him that he loves him. In a matter of weeks, he’ll appear on Fallon’s Tonight Show to promote the new series.

Rock comes across really well throughout the piece, and it’s interesting that he was diagnosed with NVLD, which I didn’t know much about before now. I don’t think Rock comes across like he’s on the spectrum, but I can see how he has trouble reading or understanding the non-verbal communication. He’s always been very literal, and now we know why. It’s also amazing that he’s in therapy and he learned how to swim as a 50-something man. That’s awesome!

Here’s the trailer for Fargo season 4: