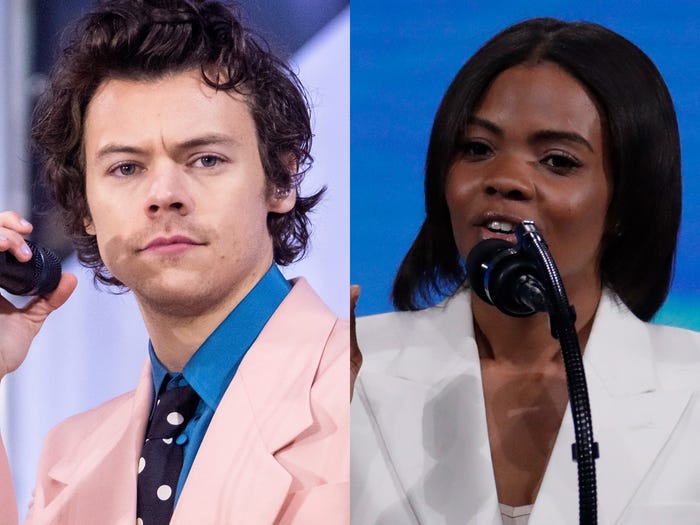 Celebrities and fans of Harry Styles are defending the singer after conservative commentator Candace Owens called his recent Vogue cover an "outright attack" on "many men."

"There is no society that can survive without strong men," Owens said on Saturday, quote tweeting a post from Vogue in which Styles spoke about having creative freedom when it comes to fashion.

She continued: "The East knows this. In the west, the steady feminization of our men at the same time that Marxism is being taught to our children is not a coincidence. It is an outright attack. Bring back manly men."

Owens' initial comment followed the debut of Styles' cover for Vogue's December 2020 issue, in which he wore a lace-trimmed Gucci dress

He also became the first man to appear solo on the magazine.

During his interview, the 26-year-old "Fine Line" singer spoke about his gender-fluid style, saying: "Now I'll put on something that feels really flamboyant, and I don't feel crazy wearing it."

"I think if you get something that you feel amazing in, it's like a superhero outfit," he continued. "Clothes are there to have fun with and experiment with and play with."

Styles also said that "barriers" between what's considered men's and women's clothing are "crumbling away."

"Anytime you're putting barriers up in your own life, you're just limiting yourself," he said. "There's so much joy to be had in playing with clothes."

"Harry Styles is plenty manly, because manly is whatever you want it to be, not what some insecure, toxic, woman-hating, homophobic d—heads decided it was hundreds of years ago. He's 104% perfect," Jamil tweeted.

In an additional tweet, the "Good Place" star posted a photo of Nicholas Hoult in the period piece film "The Favourite" and wrote: "This was at one time considered very manly. Wigs, make up, tights, frills… maybe this is the comeback of the 'manly man.'"

Wilde, who will be serving as an actor and director for the upcoming film "Don't Worry Darling," which stars Styles, called Owens "pathetic."

In the Vogue cover story, Wilde also praised Styles for being "very modern."

"I hope that this brand of confidence as a male that Harry has — truly devoid of any traces of toxic masculinity — is indicative of his generation and therefore the future of the world," she said.

Wilde added: "It's pretty powerful and kind of extraordinary to see someone in his position redefining what it can mean to be a man with confidence."

"Good morning to everyone except Candace Owens, who wants to force men (and women) into restrictive, ahistorical ideas of what it means to be 'manly,'" Karen Attiah, writer and global opinions editor at The Washington Post, wrote.

Writer and Medium columnist Jessica Valenti said: "Conservatives want to believe Harry Styles in a dress is some complicated attack on 'masculinity' rather than the much simpler truth that it's just hot."

Others also said that Owens was hypocritical for calling Styles wearing a dress, considering that she's worn suits.

Additional fans shared examples of historical figures or male musicians who have been photographed wearing clothing that was traditionally considered feminine.

In response to one particular tweet about male singers, Owens remained firm in her stance.

"PSA: Mining pictures on the internet of men in dresses is not going to suddenly make me attracted to men in dresses. I'm impervious to woke culture. Showing me 50 examples of something won't make it any less stupid," she said, concluding with "#BringBackManlyMen."