EXCLUSIVE: Amir Khan accused of breaking two-week quarantine rules after travelling from New York to the UK and failing to self-isolate

Amir Khan has been accused of breaking two-week quarantine rules after travelling from New York to the UK and failing to self-isolate.

The boxer, 33, shared pictures on his social media from a recent trip to New York, including a snap with daughter Alayna, two, at Staten Island mall – before uploading another image of him in London taken nine days afterwards.

On Instagram, Amir posted a selfie seven days ago saying he was flying from New York to London but instead of self-isolating for 14 days, he appears to have travelled from his £1.5million home in Bolton to the capital. 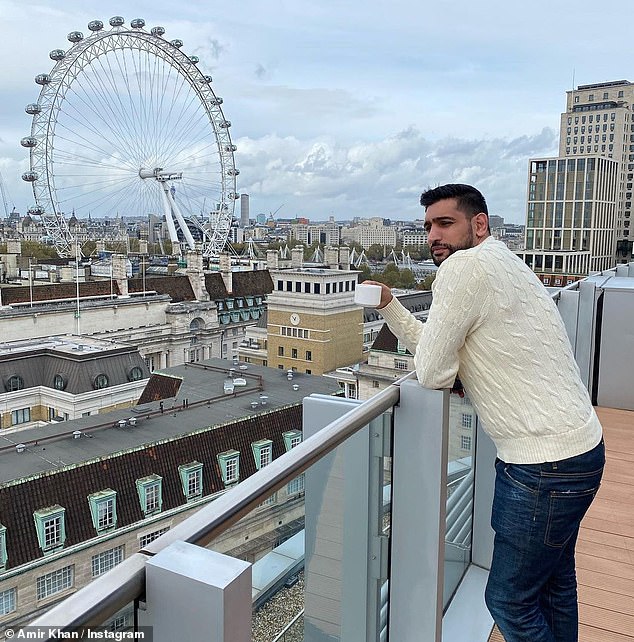 ‘Early mornings in London’: Amir Khan has been accused of breaking two-week quarantine rules after travelling from New York to the UK and failing to self-isolate

On October 18, Amir shared a photo from his Bolton mansion, where he lives with wife Faryal Makhdoom and their three children, saying ‘Our winters have started in the UK’ before sharing posts from New York two days later.

During his trip to the States, Amir appeared not to isolate on arrival after uploading a video to his page, which boasts £1.3million followers, of him ‘feasting with family and friends’ in New York.

A week after stating he was leaving America, Amir has shared a photo with the London Eye in view, alongside the caption: ‘Early mornings in London.’

It would seem from Amir’s social media updates that he has not isolated for the government’s required 14-day period after returning from international travel, with a fine of up to £10,000K in place for repeat offenders. 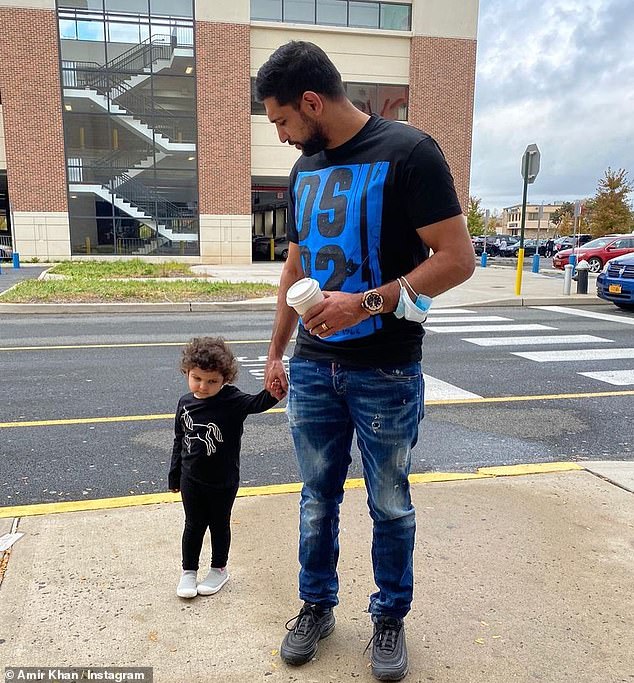 Rule break?: The boxer shared pictures on his Instagram from a trip to New York, including a snap with daughter Alayna at Staten Island mall – before uploading images of him in London 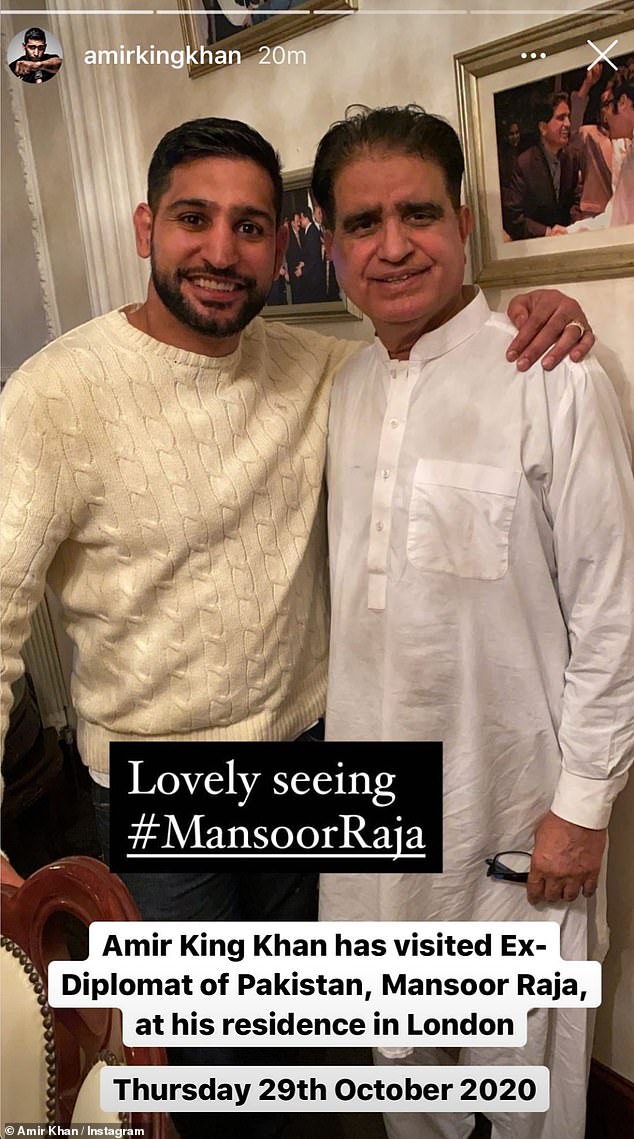 Another visit: Amir also shared a story about visiting ex-diplomat of Pakistan, Mansoor Raja at his residence in London on Thursday, possibly putting him at risk following his travel

A source told MailOnline: ‘We made examples of footballers not following the rules, so why not Amir?

‘Celebrities and sports professionals that unapologetically break the rules and even post their whereabouts on Instagram need to be reprimanded for their actions.’

As well as failing to isolate, which is in place to reduce the spread of coronavirus, Amir visited ex-diplomat of Pakistan, Mansoor Raja, at his residence in London on Thursday, which could potentially put him at risk.

In another Instagram story shared the last 24 hours, Amir posed with his arms around a group of four friends, which appeared to be another break in following social distancing rules.

Earlier this month, on October 14, Amir shared a photo alongside a group of five friends and his wife in Pakistan at the Islamabad Marriott Hotel – five days before sharing pictures from New York.

It is not known if Amir is exempt from the current rules given his status as a sporting professional, but if he isn’t then the overseas travel documented on his Instagram profile would suggest he is in breach of the regulations. 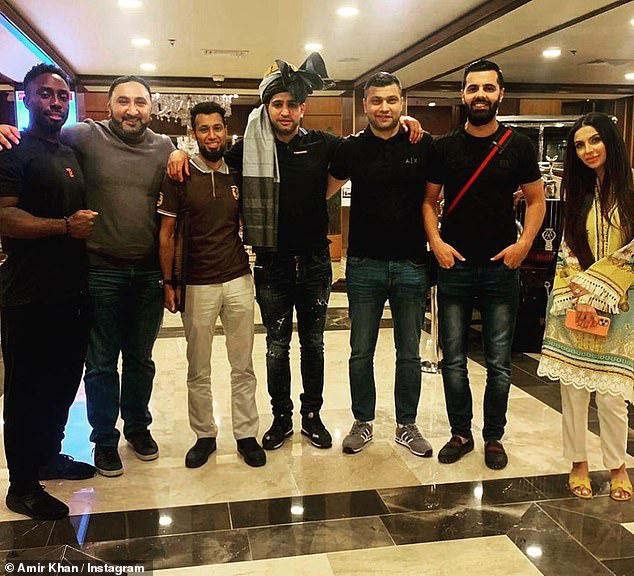 Social distancing?: On October 14, Amir shared a photo alongside a group of five friends and his wife in Pakistan at the Islamabad Marriott Hotel – days before sharing pictures in New York

The father-of-three was previously accused of breaking lockdown restrictions in August when he celebrated Eid with friends and family in Bolton.

In May, he was also reported to have flouted the rules after meeting up with his parents following a three-year feud, so they could meet his son, Muhammad Zaviyar, for the first time since he was born.

Amir, who has still be travelling throughout the pandemic, holidayed with wife Faryal to Dubai in September, with the pair sharing photos from the luxury destination. 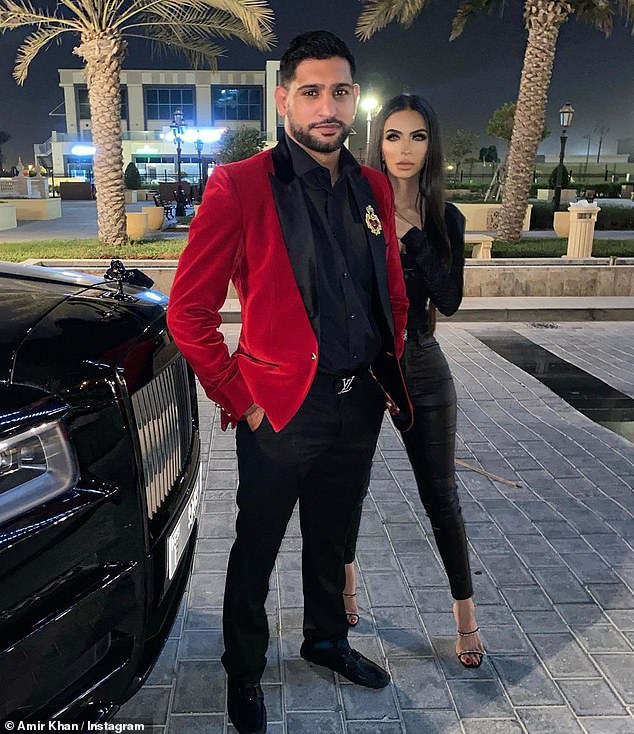 Holidaying: Amir and his wife Faryal enjoyed a break in Dubai in September, where the pair were seen together in another Instagram picture posing in front of a luxury car

It was reported that police were called to Amir’s house last week to investigate whether a man was behaving aggressively at his residence.

Greater Manchester Police confirmed they were called and said inquiries were continuing.

According to a source, Amir, who appeared in 2017’s I’m A Celebrity, had feared the incident could delay filming of Meet The Khans: Big In Bolton, the family’s upcoming reality show.

The series, which will be an eight-parter on BBC Three, promises to ‘take us into the world of Olympic medallist and boxing World Champion Amir Khan and his influencer wife.’ 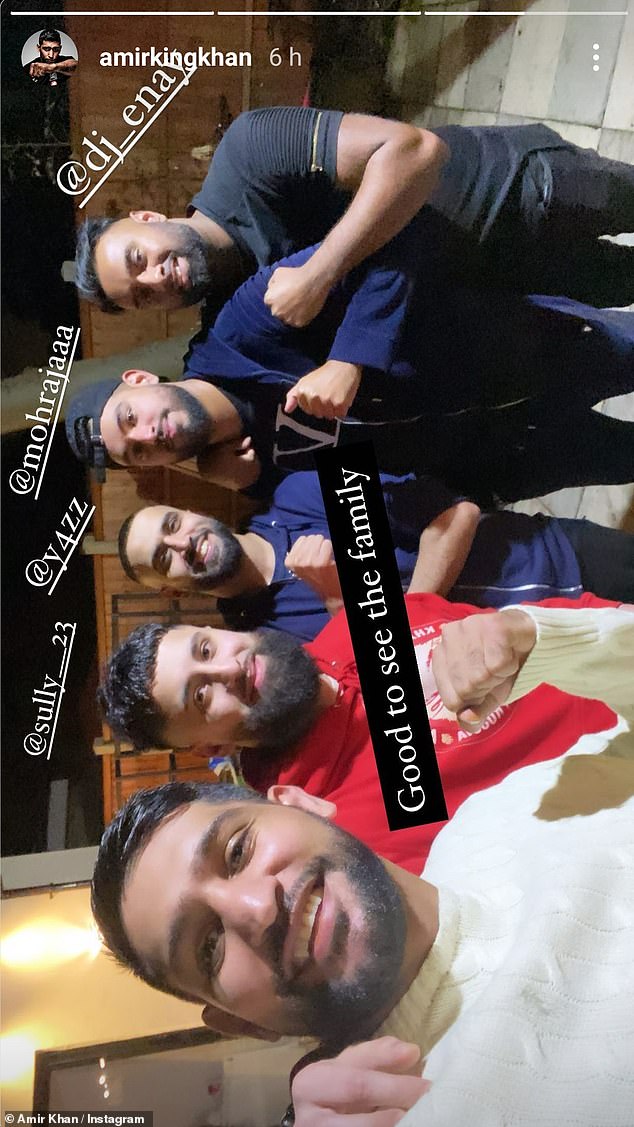 ‘Good to see the family’: In the last 24 hours, Amir posted a story to his Instagram showing him alongside four other friends, with the group not adhering to socially distancing regulations