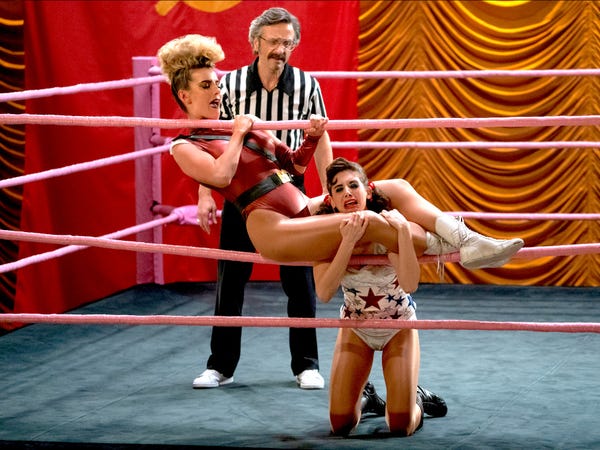 The stars of Netflix's wrestling comedy-drama "GLOW" are sharing their reactions to the show's cancellation after the news broke on Monday.

Deadline reported that Netflix decided not to go ahead with the show's fourth and final season because of production concerns related to the coronavirus pandemic. "GLOW" had been renewed for a final season in August 2019.

Following the announcement, the show's stars took to social media to share their feelings on the news.

"Going to miss this… Forever grateful to my GLOW family for changing my life forever," Alison Brie, who played star wrestler Ruth Wilder, wrote on Instagram.

She also shared several behind-the-scenes photos of herself and the rest of the "GLOW" cast.

Going to miss this… Forever grateful to my GLOW family for changing my life forever. ❤️ #glownetflix

Marc Maron, who played director and later referee Sam Sylvia, broke the news to his Twitter followers in a short tweet.

And plenty of other "GLOW" stars also weighed in on the news of the cancellation.

Johnson shared a link to the Deadline article about the cancellation, with the caption "WEAR A MASK!" Gates later retweeted Johnson's tweet, adding the hashtag "#saveglow."

Shakira Barrera played Mexican-American wrestler Yolanda, and thanked one of the show's creators, Liz Flahive, for "changing" her life.

And Britt Baron, who played teenage wrestler Justine, shared an image of the "GLOW" cast to Twitter with the caption, "My heart."

The show's stars weren't the only Twitter users reacting to news of the cancellation. Numerous fans also shared their anger and disappointment at the fact that Netflix was prematurely ending the acclaimed comedy-drama.

"Glow" is the latest of several Netflix originals to be canceled this year.

Other shows, like "Teenage Bounty Hunters," "I Am Not Okay With This," and "Dark Crystal: Age of Resistance" have all been canceled in recent months.