For the longest time, suits were reserved for men on the red carpet. But over the years, more and more female celebrities, from Rihanna to Meghan Markle, have been stepping out in suits and tuxedos, which brings us to this question: What are the best women’s suits worn by celebrities in fashion history?

To answer this question, we looked back on the most memorable suits worn by famous women. From old-Hollywood actors like Katharine Hepburn and Marlene Dietrich to modern-day bosses like Hillary Clinton and Ellen DeGeneres, there have been some amazing suits worn by famous women in the past century. Of course, we couldn’t choose the best, so we picked our 15 favorites that show the range of how a woman can rock a suit, whether it’s like Kim Kardashian West’s oversize braless look or Janelle Monáe’s tapered and intricate tux.

Clothes are a gender norm, and these stars are here to remind us of that. There’s no one dictating what one should or shouldn’t wear because of someone’s gender, so why should it happen on the red carpet? Maybe one day, we’ll see a sea of celebrities wearing genderless clothes. But until then, we have these 15 beautiful suits to look back on. 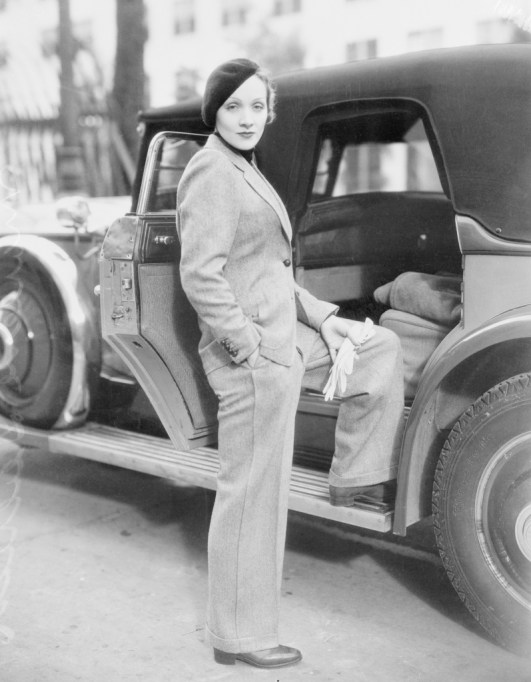 After starring as a tuxedo-wearing cabaret singer in 1930s Morocco, a role for which she earned an Oscar nomination, Dietrich became a household name and a pioneer for androgynous style. Her go-to outfits often included tuxedos and tailored suits. Here, she’s seen wearing a beret with a gray men’s suit and turtleneck sweater in January 1933. Dietrich is often credited by fashion historians for popularizing tailored clothes among women. 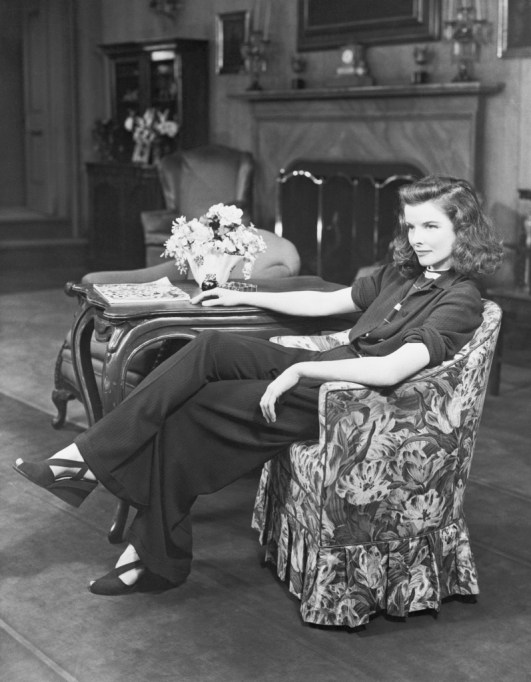 Hepburn often set herself apart from other women in old Hollywood by choosing to wear slacks over skirts — long before it was socially acceptable for women to wear pants. She was also one of the first women to wear slacks on-screen when she wore pants 1943’s Philadelphia Story. Here, she is seen reclining in a pantsuit and sandals for a portrait in March 1940. 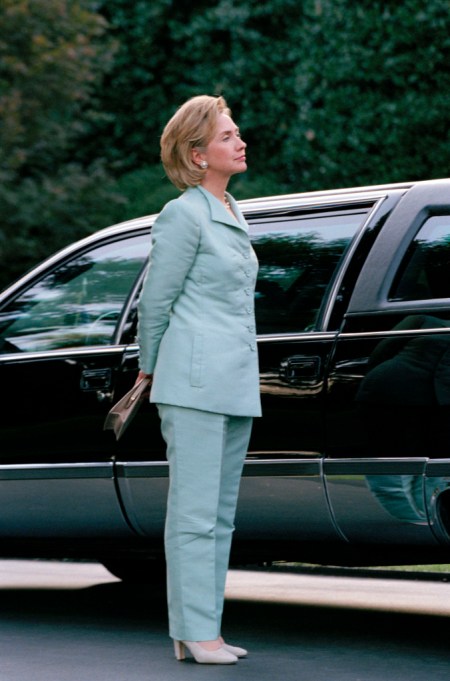 Clinton became so synonymous with suits in her 2016 presidential run that her following became known as the Pantsuit Nation. But the former Secretary of State’s love of well-tailored suits started long before she ran for office. When she was first lady in husband President Bill Clinton’s administration in the ’90s, Clinton was known for her colorful and chic suits. Here, she’s seen wearing a light-blue pantsuit with white kitten heels as she waits to leave after the Democratic Business Leaders event in September 1998. 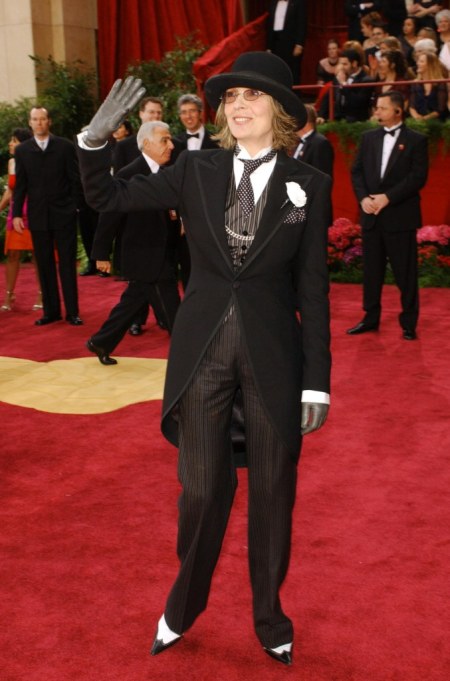 Along with earning Keaton an Oscar nomination in 1978, Annie Hall revitalized women’s fashion in the disco era. Keaton’s titular character — a gloves-wearing, fedora-loving comedian with a knack for pairing vests with patterned ties — provided a much-needed break from the disco era’s flamboyant and extravagant wear. It makes sense Keaton would channel her iconic ’70s character with her look at the February 2004 Oscars, where she was nominated for her role in Something’s Gotta Give. 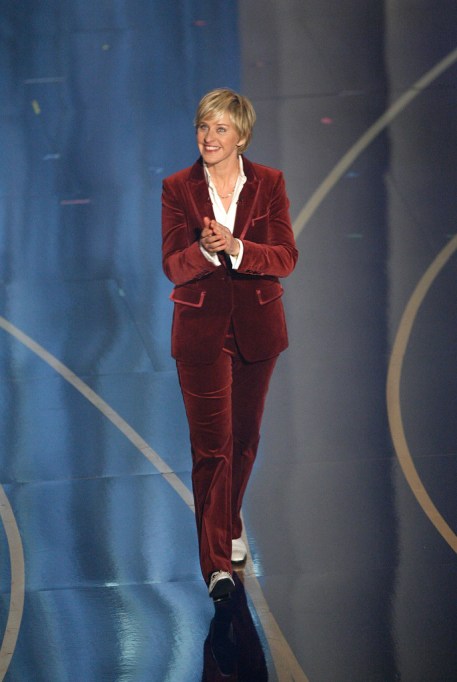 Who is DeGeneres without her suits? Whether on her talk show or on the red carpet, the comedian is almost always seen in pants with a well-tailored jacket. So in 2007, when she hosted the Oscars, the premier award show for fabulous red carpet-wear, we knew we were in for a treat. The comedian’s most memorable suit was the velvet burgundy look, which she paired with her signature crisp white sneakers, pictured here. 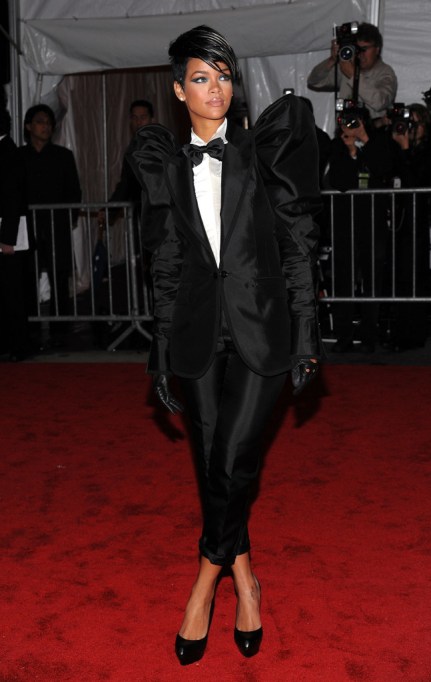 Rihanna is known as the queen of the Met Gala fashion, from her omelettelike dress in 2015 to her flower-inspired ensemble in 2017. But one of her lesser-known looks was at the 2009 Met Gala, where she wore a sleek black tuxedo with exaggerated shoulder pads and black gloves. The theme that year was “The Model as Muse: Embodying Fashion,” and who is a better embodiment of fashion than Rihanna?

From the music video for her 2010 single “Tightrope,” Monáe established herself as a suit-wearing boss. She almost exclusively wore the look for red carpets and performances, and well-tailored, beautiful suits soon became synonymous with her brand. But that doesn’t mean Monáe’s suits were boring. From flower embellishments to dramatic lapels and coattails (as seen here at 2013 Grammys), Monáe proved suits are anything but boring. 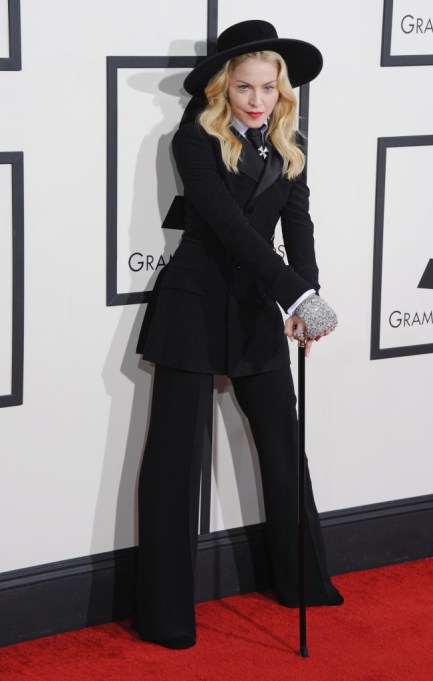 Madonna is no stranger to wearing suits, but one of her most badass looks was in 2014 when she singer attended the Grammys in a witch-reminiscent tuxedo with a full-on cane. Madonna paired the look with a bedazzled glove, a black fedora and a bejeweled cross pin on her tie for some extra pizzazz. 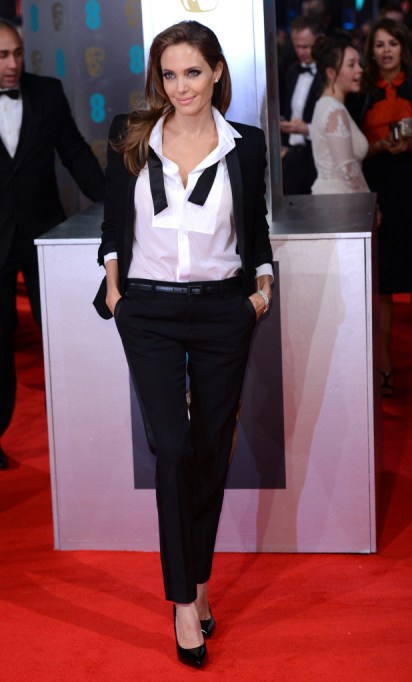 Jolie matched her then-husband Brad Pitt at the 2014 British Academy Film Awards with a sleek and sexy tuxedo. The skinny-fit suit featured a slim belt and an open blazer, but what made the look especially memorable was Jolie’s unbuttoned shirt and undone bowtie, which she wore draped over her net. The actress’s suit sure made her husband’s look like child’s play. 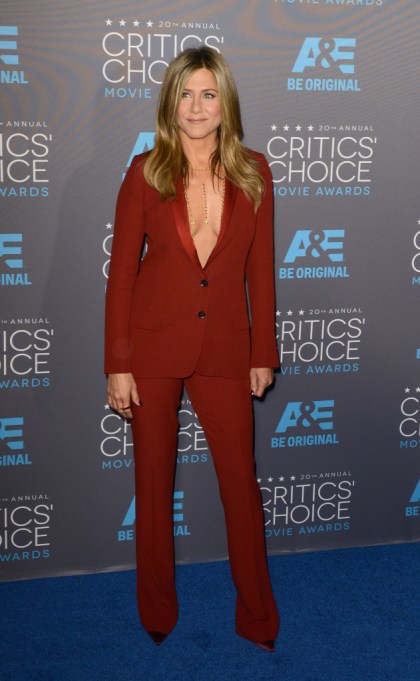 Not too long after hiring Lupita Nyong’o’s stylist, Micaela Erlanger, in 2015, Aniston made some noticeable changes to her usually safe outfits. One such look was at the 2015 Critics’ Choice Awards, where the actor showed up in a crimson Gucci suit with body chains and matching red shoes. 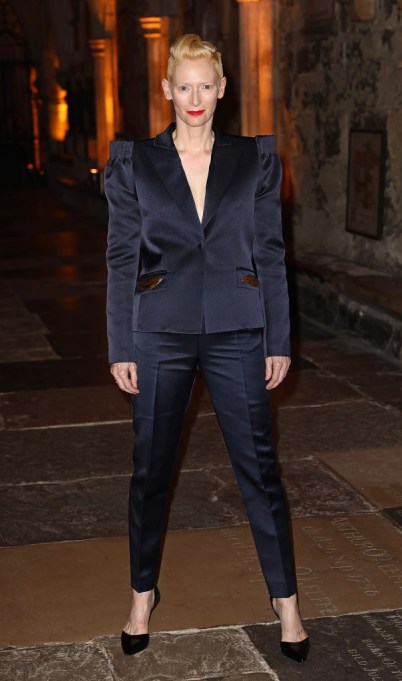 Since she came onto the scene 30-plus years ago, Swinton has been known for her androgynous style, so it comes as no surprise she’s worn some memorable suits over the years. One that’s especially loved is her structured dark suit from the 2016 premiere of Doctor Strange in London. The suit featured blink-and-you’ll-miss-it details on Swinton’s jacket pockets and dramatic ruched shoulder pads. 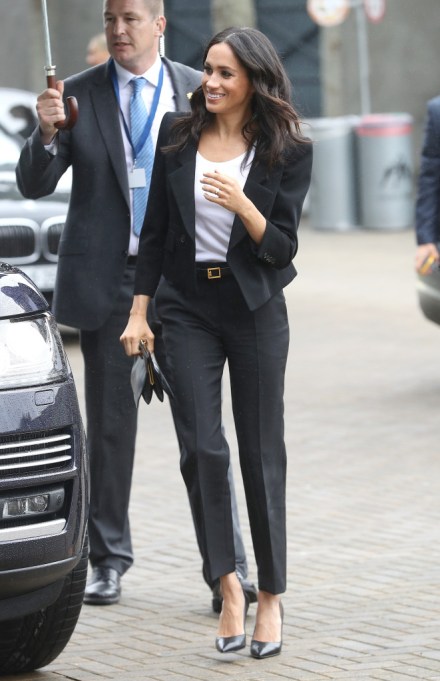 The now-Duchess of Sussex’s suit from her visit at Dublin’s Trinity College in July 2018 doesn’t seem especially special at first glance. But there was a lot of controversy that followed the look. According to a source for People, traditionalists in Kensington Palace, including Queen Elizabeth, aren’t fans of Meghan wearing suits. Has that stopped her? Not a chance. “[She] has found certain rules in the royal household difficult to understand, like the fact that the Queen prefers women in dresses or skirts rather than trouser suits, and is often asking Harry why things have to be done in a certain way,” a source said. 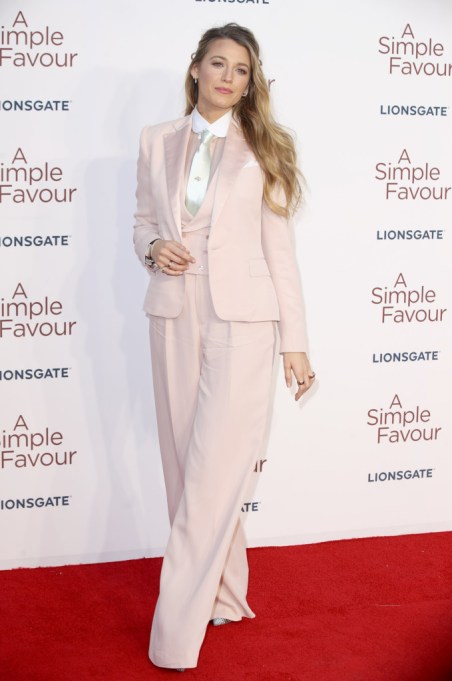 When promoting her 2018 film, A Simple Favor, Lively made it her mission to only wear suits to promotional events. The decision was a nod to her character, a mysterious mom who goes missing and who almost exclusively wears pantsuits in the film. There are a lot of memorable looks from Lively’s press tour to fawn over, but one of our personal favorites was this off-white one from A Simple Favor‘s London premiere in September 2018. 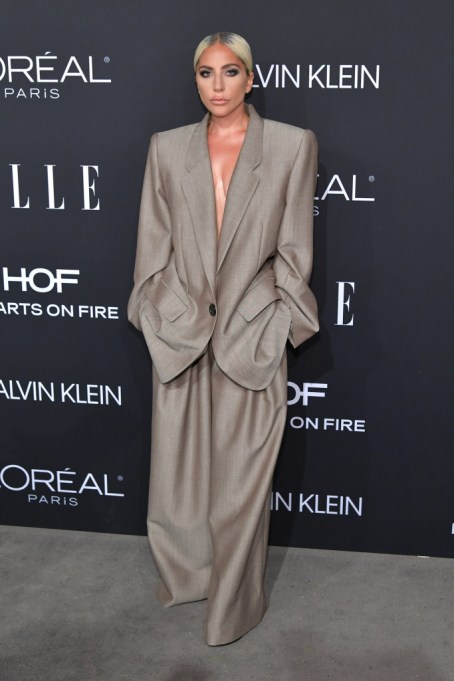 Gaga’s oversize gray suit at Elle’s Women in Hollywood dinner in October 2018 made headlines for the emotional reason behind the look. During her speech at the event, Gaga revealed she chose the suit as a way to take back her body from men who objectify her and other women. “As a sexual assault survivor by someone in the entertainment industry, as a woman who is still not brave enough to say his name, as a woman who lives with chronic pain, as a woman who was conditioned at a very young age to listen to what men told me to do, I decided today I wanted to take the power back. Today I wear the pants,” she said. 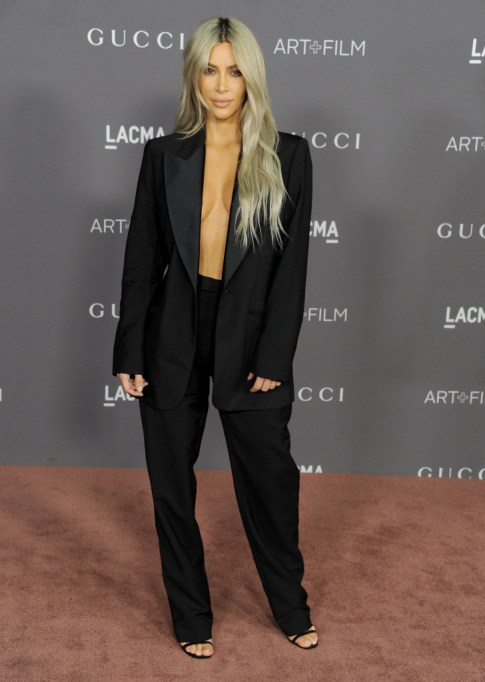 Kardashian West’s fashion might not be for everyone, but there’s no doubt it makes a statement. At the 2017 LACMA Art+Film Gala in November 2017, the reality star matched her mom, Kris Jenner, with a loose black suit. She wore the look with black heels, silver hair and no bra underneath.