Phoebe Dynevor just boosted her red hair color to a fiery new hue, she revealed on Instagram! See the before and after pics, here.

Phoebe Dynevor is looking red hot with her colorful new hair makeover! The Bridgerton breakout star, 26, showed off a bright new ‘do on her Instagram Story, revealing that her hair is now a fiercer red than her usual ginger locks. We’re talking fire engine, Lindsay Lohan-level spice. See her new look, and a “before” shot below.

Doesn’t she look fantastic? Phoebe’s new hair color comes as she films the second season of Bridgerton, her hit Netflix show. Phoebe will reprise her role as Daphne Bridgerton — sans her dreamy love interest, the Duke of Hastings. Yes, unfortunately, Regé-Jean Page didn’t sign on for Bridgerton season two, much to his fans’ disappointment. And no, there sadly won’t be a Regé-Jean cameo, either, according to show creator Shonda Rimes.

Phoebe’s real life love interest has people talking, too. She and Saturday Night Live star Pete Davidson, 27, recently confirmed that they’re dating with some cute PDA pics. There was much speculation after the twosome were spotted wearing identical necklaces that showed the initials “PD.” Yes, those are their own initials, to be fair. But the exact same necklace? They had to be talking about each other, right? 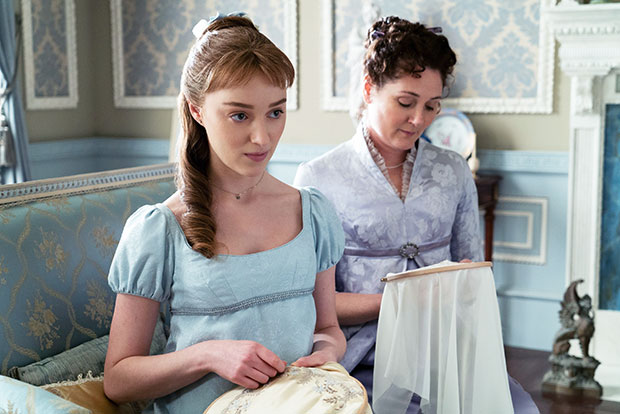 It’s the real deal, according to a source who spoke People. Pete is telling friends he’s serious about her,” they dished. “They’re really into each other.” The report comes after Pete revealed during a fan Q&A Zoom call with Marquette University that he was dating his “celebrity crush.” While The King of Staten Island star didn’t confirm that he was talking about Phoebe, he looked so happy and got tongue-tied talking about his new romance with his lady.