Meghan Markle and husband Prince Harry looked emotional on Tuesday night as they arrived in a car at Buckingham Palace, ahead of viewing the Queen’s coffin together for the first time.

SEE: Prince Harry and Meghan Markle pictured with King Charles for the first time since Queen’s death at Buckingham Palace

Meghan could be seen in a chic black dress with her hair styled in loose waves, and she opted to debut a new makeup look for the occasion.

WATCH: Queen’s friends and family to have final private moment

The Duchess of Sussex always looks picture perfect, normally wearing her makeup in a natural, pared-back style, but during her latest appearance, the mum-of-two looked glossy and glamorous, with dark eyeliner and what looked like a statement smoky eye.

SEE: Why Princess Kate and Duchess Meghan will wear veils at the Queen’s funeral

The chic look is a departure from her usual low key makeup, but looked just as lovely as always, with the dark makeup matching the sombre occasion. 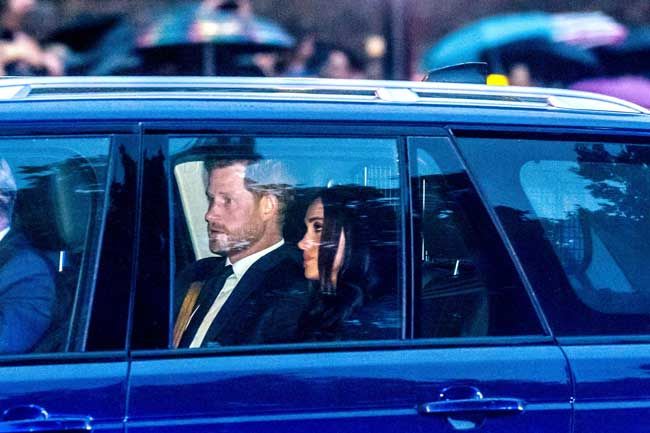 The couple were on their way to Buckingham Palace, to view Queen Elizabeth II’s coffin. Her Majesty arrived back in London on Tuesday after making her final journey from Scotland. Her coffin was transported by plane to RAF Northolt, accompanied by her devoted daughter, Princess Anne.

The Queen spent Tuesday night in the Bow Room at Buckingham Palace – where she once hosted dinners for foreign royals and dignitaries. 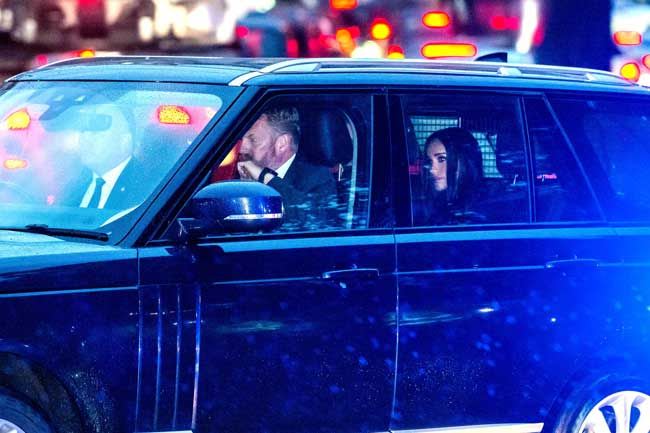 Harry and Meghan were spotted on their way to Buckingham Palace

On Wednesday, a procession will take place to move the late monarch to Westminster Hall, where the Queen will lie in state for four days.

The coffin will leave Buckingham Palace at 14:22. Crowds will be able to watch as the cortege makes the journey through central London – along Queen’s Gardens, The Mall, Horse Guards and Horse Guards Arch, Whitehall, Parliament Street, Parliament Square and New Palace Yard.