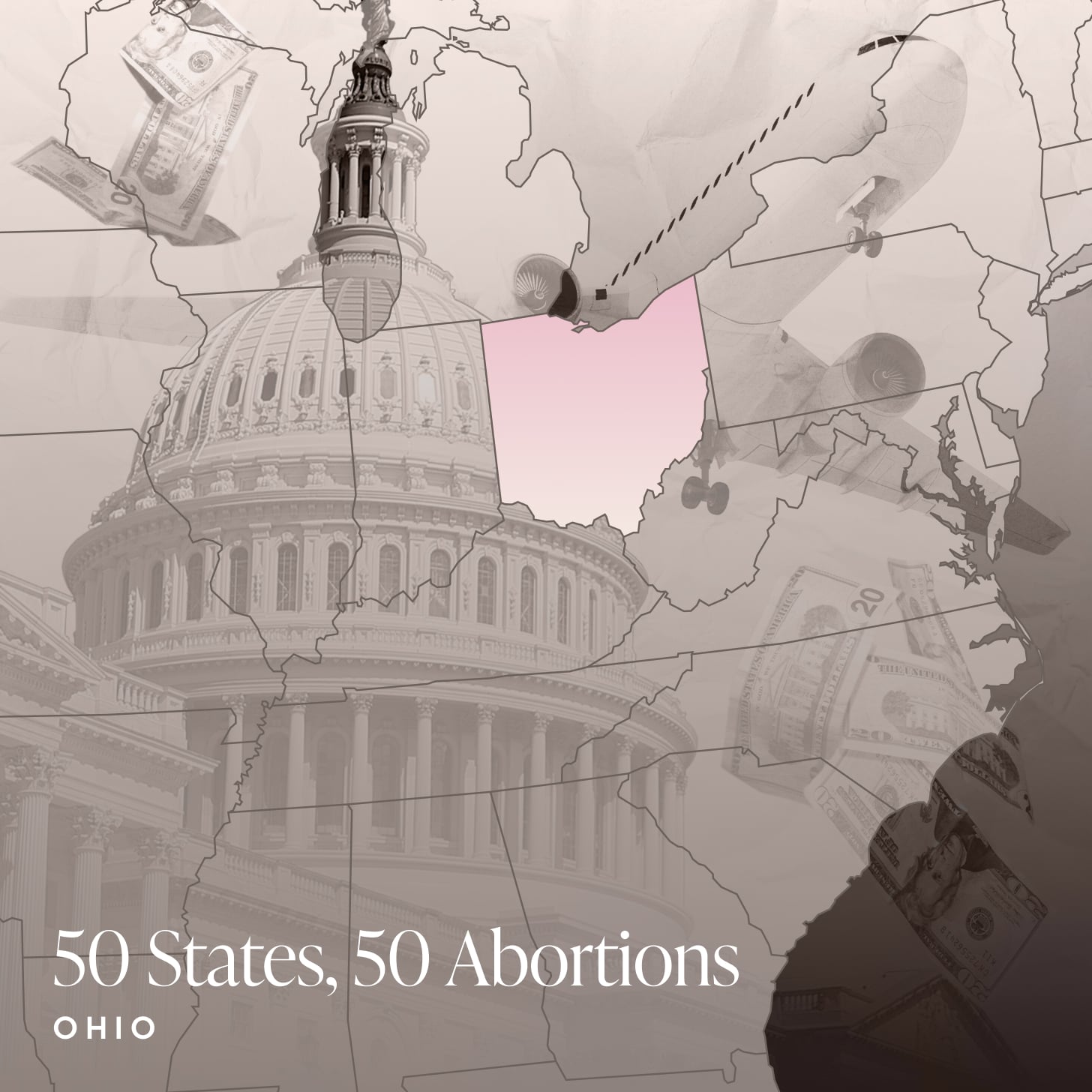 My dog was actually how I found out I was pregnant. He started acting real sus around my midsection, and I said, “Hmm. I should take a test.”

I was in a long-term relationship with my partner that I was with since high school. We were together for about three years when I found out I was pregnant. I was 18. I went to a public school in Ohio, and we did not have adequate sex education. It was abstinence only. And so we hadn’t used protection for two years. I had convinced myself that one of us just must be infertile because I hadn’t gotten pregnant yet, so shout-out to my school. That’s not how it works.

My periods have never been regular, so I had no idea that I missed a period. I just started feeling a little off, and really, truly, the only reason that I started to think I was pregnant was because my dog at the time just started acting really weird around me and was, all of a sudden, very protective and would lie on my stomach and midsection. I said, “Hmm, things are not adding up.”

So I took a test, and it was positive. And I immediately knew that I wanted to have an abortion. I had no interest in being pregnant or being a parent.

I had to find the nearest clinic to me, which was in Columbus, a little over an hour away from where I was living. They, unfortunately, are no longer open.

I believe my consultation was $250, which was a lot for me at the time, and I didn’t know that abortion funds existed. After I had my consultation, I just had to wait two to three weeks after that to schedule my actual surgical [procedure] — just to be able to be paid again, to pay for it. That put me at 11-and-a-half weeks, which made my procedure more expensive. I think my total, including the consultation fee, was around $800 to $900.

At the time, in 2015, there was this law in place in Ohio that meant my doctor had to walk me through how far along I was and if I decided to keep my pregnancy, how viable it would be. I had to wait at least 24 hours because of the mandatory waiting period.

The barriers I faced were minimal compared to people having to travel out of state now. But even those barriers made it harder for someone like me that was privileged enough to be able to go to a clinic over an hour away from my home twice. All of those things are still f*cked up and shouldn’t have to exist.

Otherwise, though, my experience was great. I had only heard really negative things about abortion. I did encounter one antiabortion protester on the day of my consultation. But the people in the clinic were amazing. I remember the nurse holding my hand. Everyone was so warm and loving. It was probably a five- or 10-minute procedure. I remember my doctor asked me where my partner was taking me to lunch after, which I later found out was his go-to question, and which I thought was really cute.

In the observation room after the procedure, they gave me Cheez-Its and apple juice, which you would not think go well together, but it was delicioso that day. The nurses came around to check on us, then the doctor came out and was like, “Babe, you’re good.” And I went home and got some fried chicken and a slushie and watched “Game of Thrones” with my dog.

This was seven years ago. Now, I might not have been able to access care in my state because of our current legislation and bans. That is hard to think about — that I wouldn’t have been able to have the experience that I had. (Editors’ note: At the time of this interview, Ohio had banned abortions after six weeks. As of press time, that law had been blocked indefinitely, and abortions in the state are currently legal until 22 weeks of pregnancy, reports ACLU Ohio.)

Even back then, I knew that we had lost quite a few of our abortion clinics already. But when I had my abortion, it was probably a year before the first “heartbeat bill” or six-week ban was introduced in Ohio. When that bill was introduced, that’s when I started talking about my abortion publicly for the first time.

I hadn’t prior to that, not because I had any negative feelings about abortion, but because I hadn’t heard any really positive abortion stories. I felt like I couldn’t take up space by sharing my story — I thought that there was something wrong with me because I wasn’t upset about my abortion, which is not the case. The majority of people don’t regret their abortion. For the majority of people, it is just a regular Tuesday, like it was for me. But since that ban was introduced, I have not shut the f*ck up about my abortion.

When I did start sharing my story, I posted about it on Facebook first. And then I was like, “Oh sh*t, I should probably message my mother.” Luckily, she was super receptive to it.

About six months after that, I started working in the reproductive-rights movement. And one night, my mother and I were at Olive Garden having a nice pasta dinner, and she told me that she’d had an abortion, too. That was a bonding moment for us — over our chicken fettuccine alfredo.

I hadn’t told my parents I’d had an abortion at the time because back then, I didn’t know that there was this whole community that was like, “No, actually, abortion is not this sad, traumatic thing, and you’re allowed to have whatever feelings you have about it.” My family has always been Democratic or left-leaning, so I was aware that I wouldn’t be cut off. But even people who are left-leaning have weird feelings about abortion sometimes. Thankfully, my parents were very receptive. Now they both wear their silly little abortion-fund T-shirts all the time. I love it.

Looking back, I wish that I didn’t have to deal with the internalized stigma that I had at the time. The only reason that I wasn’t talking about my abortion is because of how other people were deflecting their own feelings about abortion onto me. Once I did talk about it, my mom felt comfortable sharing her experience with me. I just wish that would’ve happened sooner, and the only reason it didn’t is because of abortion stigma.

Also, when I had my abortion, I had no idea that abortion funds existed. I’m currently the board chair of Abortion Fund of Ohio, Ohio’s only statewide abortion fund. Since the Roe decision came down and especially since the six-week ban went into effect in Ohio, the amount of support that AFO has received is just mind blowing to me. (Editors’ note: The six-week ban was blocked on Sept. 14, and as of the date of publication, abortions are legal in Ohio up to 22 weeks of pregnancy.) I went to a farmers’ market the other day, and three of the booths were doing fundraisers for us. It’s been really beautiful to watch people uplift abortion funds and practical-support groups so that people don’t have to struggle in similar ways that I did and deal with all of these added barriers that have popped up since I’ve had my abortion. We feel really honored to be able to support people through their abortion journeys.

I think that all abortion bans, no matter the severity, are based in classism, racism, and bodily oppression. Our government, both in Ohio and at the federal level, has made it clear that it doesn’t care about our communities. So turning to mutual-aid groups and supporting abortion funds is how we’re going to get to liberation, and focusing on building out mutual-aid groups through a reproductive-justice lens is how we’re going to take care of each other.

If I could go back and give my younger self advice, I’d tell her: F*ck what anyone else has to say about your experience. You can have whatever feelings you want to about it. And also, look up abortion funds.