When the city shut down in March 2020 due to the pandemic, I lost my cooking job at Insa, a Korean BBQ restaurant in Gowanus. I’d hoped to join the FDNY training academy to become a firefighter, but they postponed until further notice. I was distraught and completely shut down for a solid three weeks. I watched a lot of TV on the couch, slept late, woke up late.

One day I read a quote that really kicked me in the ass. Something like, “If not now, when?” If I have all this free time, I gotta try something. I gotta pick running back up. I wanted to be ready for the FDNY academy if they did call. I ran five times a week, five miles from Brooklyn to Chinatown and back. Running became a huge escape from whatever was going on in the world and helped me maintain emotional and physical balance. I was interested in ultrarunning, so I bumped to eight miles, then 10, then a half marathon. I kept going. At the same time, I’ve been exploring my identity as a human being. What am I here to do? How should I spend my time trying to do it?

At the beginning of April 2020, some friends started an organization called Welcome to Chinatown. They do grassroots community work and had a “Feed Our Heroes” initiative to raise money to buy bulk meals from Chinatown restaurants for frontline healthcare workers. I thought, why don’t I run to raise funds for that cause?

My roots are in Chinatown—my family has been there for four generations. It’s its own community, mostly Chinese people, very close knit. I find myself walking down the street saying hi to someone on every block. People have been here for so long. Everyone looks out for each other. My great-grandparents immigrated from Toisan, China, and established roots in an apartment on Mott Street, where my mom still lives. She was an activist during the Asian-American Movement in the 60s and 70s. Her love for the Asian community and for Chinatown was definitely passed on to me. I’ve found my own way to show support. 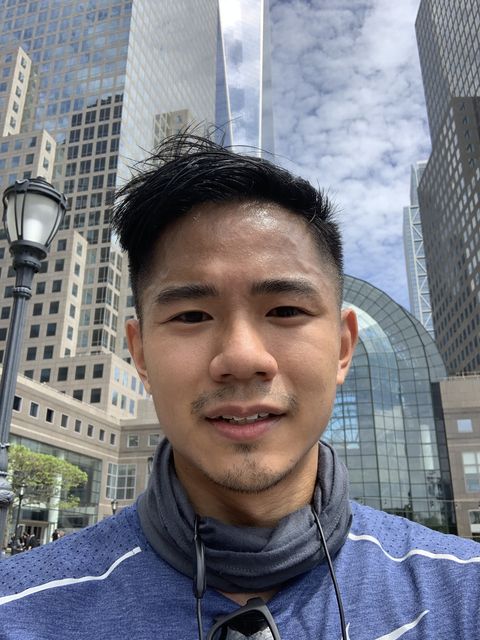 In the past year, Chinatown and other Asian communities have gone through quite a dark time. We’ve lost a long list of loved ones. Despite these tragic losses and all the pain that people have gone through, I will not forget these people. I will carry their memories as fuel. When I’m running, especially during this time, I feel that Asian communities need some inspiration and hope that things will get better. If I can help by running, then that’s what I’m going to try to do.

On May 1, 2020, I set out to cover 60 miles in 12 hours, and got friends and family to donate $1 for every mile I ran. I started at 7 a.m. in Park Slope in the rain and ran into Manhattan. I ran all the way up the West side, came back downtown, made a loop into Brooklyn and finished in Chinatown. I ran 61.6 miles. I felt wrecked for a full week, like I needed to hold onto a wall to stay up. Totally unexpectedly, I raised $25,000.

I did another 12-hour run on December 6, 2020, to raise money for three organizations: Welcome to Chinatown for a small business relief fund; the Chinese Freemason Athletic Club, a nonprofit youth association where I built my athletic foundation as a youth and learned about my culture, from martial arts to lion dance; and the Chinatown Mural Project, which is an initiative that’s installing murals around Chinatown to liven up the neighborhood and boost foot traffic. I ran 62.5 miles and raised another $25,000.

My goal throughout my running journey, which also included the Virtual NYC Half Marathon on March 22 [and raised $4,181 for the Chinatown Block Watch, which is a group that patrols Chinatown and nearby areas], has been to bring awareness to the plight of the Chinatown community. Small businesses have suffered because of a decline in foot traffic due to anti-Asian rhetoric. Hate crimes against Asians have resurged during the past two months. As a Chinese American, I want to show the world that I’m just a human being. I want to gain respect for my people.

This one year has given me perspective. I’ve got this running journey going on. And at the beginning of March, I started a pop-up restaurant called Mr. Lee’s. The experience is giving me a chance to test out my business and see if I want to continue on a bigger scale in a more permanent setting. There’s a lot on my plate, and I’m happy about it. I started with little steps. A year later, I’m taking bigger steps.

One of my future goals is to host a semi-annual or annual run for Chinatown—a race for the community, by the community. Personally, I don’t see much Asian representation in running. If I can be an Asian person in the running community, and maybe inspire others in Chinatown, young kids, maybe one day they’ll say, “Hey, I want to be like that guy.”