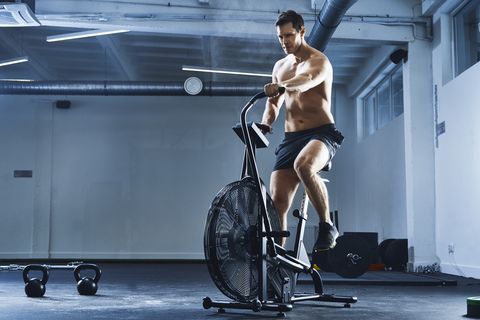 To cardio or not to cardio?

That’s the age-old question around the water cooler at your commercial gym. Unless you’re someone who loves running on a treadmill for hours or willingly enters marathons for fun, you might have a hard time finding workouts that push your cardiovascular fitness.

Thankfully, you don’t have to grind out hours of steady state activity if that’s not your style. You’ve probably heard of HIIT, as it’s become the trendiest catchphrase in the boutique fitness space—but do you really know what the acronym stands for, or even why the protocol can be a great way to train?

HIIT stands for High-intensity interval training, which refers to the short bursts of intense exercise alternated with low-intensity recovery periods that make up the protocol. HIIT is quick and anything but boring, as its exacting work-to-rest ratios make it arguably the most time-efficient way to exercise and burn calories. You can use the HIIT protocol to make up your entire workout, or only apply to a few sets for super-charged finishers.

There’s a range of accepted work to rest ratios that can be considered HIIT:

If you’re new to exercise, don’t go all out all at once. Instead of 15 to 30-second intervals executed at near-100 percent intensity, intervals of one to three minutes at closer to 80 percent of maximum effort, followed by up to five minutes of lower intensity exercise, have also been shown effective for weight loss in sedentary populations.

The Primary Benefits of HIIT

One review looked at 13 different studies on 424 overweight and obese adults. It found that both HIIT and traditional moderate-intensity exercise can reduce weight and waist circumference.

Metabolic Rate Is Higher for Hours After

Some researchers have found that HIIT increases metabolism for hours after exercise even more than jogging and weight training. This is known as excess post-exercise oxygen consumption (EPOC, informally called afterburn), a measurably increased rate of oxygen intake following strenuous activity.

HIIT is not just a tool to use to lean out. It can improve your overall health, too. A summary of 50 different studies found that HIIT reduces blood sugar levels. Further research shows it can reduce resting heart rate and blood pressure in overweight and obese individuals.

Some Ways to HIIT

So, wait, you’re still technically on that dreaded treadmill, right? Not necessarily. Here are seven ways you can HIIT your way to success.

After jogging to warm up, sprint as fast as you can for 15 to 20 seconds. Then, walk or jog at a slow pace for one minute. Repeat this pattern for 10 to 20 minutes.

Ditch the treadmill and use your own body. Each exercise is done for 20 seconds with 10-second rest in between. This style of training was shown to be equally effective as traditional HIIT sprint workouts. You’ll perform a maximum of 8 sets of 20 seconds on, 10 seconds off. It’s not for the faint of heart, but if you have a cardio machine phobia, it does the job. Some movements for your tabata training:

There’s no need to duplicate the exact exercises used here, either. Full-body exercises of any kind should substitute just fine. You can also incorporate weights for an additional challenge.

Using a stationary bike, pedal as hard and fast as possible for 30 seconds. Then, pedal at a slow, easy pace for one minute. Repeat this pattern for 15 to 30 minutes.

A barbell complex is nothing more than a circuit of compound movements using a single barbell. In the example below, you perform five exercises in sequence without dropping the bar. Floor deadlifts, overhead presses, barbell rows, stiff-legged deadlifts, and floor barbell bench presses with the same weight.

Don’t make it complicated. Just move the ropes at a fast pace and your heart rate will rise. Every movement generally involves swinging your arms up and down (or side to side) for timed intervals. That said, make sure to always keep a neutral spine and stay low in a seated, stable position with your knees bent. Go full out for 20 to 30 seconds, rest just enough to recover, rinse and repeat.

Many sports are anaerobic in nature, and the sled allows you to improve your anaerobic conditioning by performing sprints that are short in duration and high in intensity. Load approximately 70 to 85 percent of your maximum pushing capacity to the sled. Your goal is to push this weight as explosively as possible until you can barely move it. It won’t be long. Rest for 3 to 5 minutes between rounds. This longer rest interval will allow your phosphagen stores to recover. For more of an aerobic workout, lighten the load and push for longer, with shorter rest intervals.

Sprinting on an incline prevents over-striding and decreases the impact on your joints. You’re also far less prone to tweak a hamstring doing hill sprints than sprinting on a flat surface. Go hard until you hit the top of the hill (20 to 30 seconds) and walk down slowly for your rest.

A final word of caution: Even though HIIT workouts are now considered safe for an increasingly wider range of people thanks to the modifications mentioned above, people with conditions like uncontrolled diabetes, hypertension, or a history of cardiac events should stick with more moderate intensity workouts unless cleared by their physician.