While Australia's smoke-filled summer brings health warnings about the effect of pollution on our internal organs, the beauty industry is focused on what the air is doing to our external organ.

In recent years, "anti-pollution" moisturisers, foundations, face masks and sprays containing ingredients such as niacinimide (promoted as restoring the skin's barrier to reduce the risk of inflammation) and vitamin C (to assist skin repair) have been released by brands ranging in price point from Revlon to Chanel. 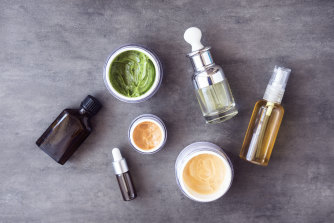 When it comes to ‘anti-pollution’ skincare, claims are being made on the basis of little evidence, dermatologists say.Credit:Shutterstock

Cosmetics companies have even moved into monitoring our air quality: L’Oreal-owned La Roche-Posay's My Skin Track UV wearable sensor and accompanying smartphone app gives a pollution and UV reading based on your GPS location, recommending products for your environment.

But dermatologists warn the benefits of the many anti-pollution skincare products may be overstated.

Smoke from sources including bushfires, exhaust and cigarettes do damage the skin, explains Dr Deshan Sebaratnam, consultant dermatologist and senior conjoint lecturer at the University of New South Wales.

"Air pollution is thought to induce inflammation on the skin, generate free radicals [which damage skin cells], and alter the microbiome of the skin (i.e. change the populations of the organisms that live on our skin and contribute to skin health)," he says.

"It can also make some skin conditions like eczema worse and contribute to the appearance of ageing."

Unfortunately, although ingredients being marketed as "anti-pollution" (which are usually either antioxidants or have moisturising properties) may improve the appearance of your skin in general conditions, there is no evidence to suggest they do much to "protect" your skin from pollution.

Dr Andrew Miller, spokesperson for the Australian College of Dermatology and dermatologist at ACT Dermatology in Canberra, says it is a "mystery" to him how cosmetics described as "anti-pollution" would protect the skin from the effects of smoke.

"I have tried to find out what the magical ingredients are that convey anti-pollution properties – whatever they are – but can’t," he says.

When asked about claims ingredients such as vitamin C and niacinamide are able to safeguard skin from pollution, Dr Serabatnam is similarly unconvinced, noting little to no clinical trials have been done on the topic.

"I don't think there is enough evidence to back up some of these products being 'anti-pollution'," he says.

"Products which offer a physical barrier between the skin and particulate matter or those containing antioxidants [such as niacinamide] to combat free radicals theoretically may help, but more rigorous scientific studies are needed before these can be advocated."

Instead, the product Dr Serabatnam recommends including in your skincare routine during periods of high pollution is one that should have been in there in the first place: sunscreen.