Prince George may only be eight years old but he’s already got a huge following amongst royal fans. The eldest son of the Duke and Duchess of Cambridge is third in line to the throne after his father Prince William and grandfather Prince Charles, so an important future awaits him.

We’re used to seeing sweet George at the occasional public outing with his parents, but the young royal’s home life is kept very private. Read on to discover the 13 little-known facts about Prince George…

MORE: 22 of Prince George’s cutest moments through the years

Did you know that George’s birth on 22 July 2013 was the second time that three generations in direct line of succession to the throne have all been alive at the same time?

The last time this happened was between 1894 and 1901 at the end of the reign of Queen Victoria.

He went on tour as a baby

Granted, he only appeared twice during the tour but it was enough for the BBC to dub him ‘the star of the show’. George went on a royal tour as a baby

Young George has no shortage of people looking out for him as he journeys through life. 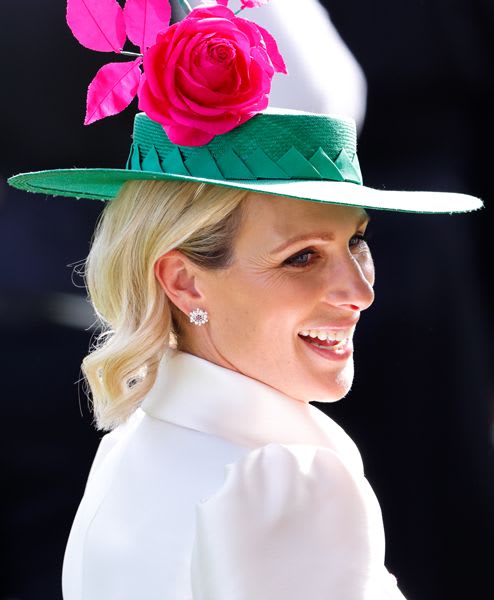 Zara Tindall is one of Prince George’s godparents

He could be a future tennis champion

Tennis superstar Roger Federer could have a future tennis champ on his hands after he gave Prince George a special private lesson. Roger confirmed that he had been to the home of the Duchess of Cambridge’s parents, Carole and Michael Middleton, to meet the young royal.

He said that the “cute” youngster had a good tennis technique after they played together. This year was George’s first year attending Wimbledon and by the looks of it the little one enjoyed the action on the centre court as he watched the men’s singles final between Novak Djokovic and Nick Kyrgios.

The nine-year-old’s presence in the royal box was a rare sight, however, as usually children are not invited to sit there. In fact, only royal children are allowed to do so. 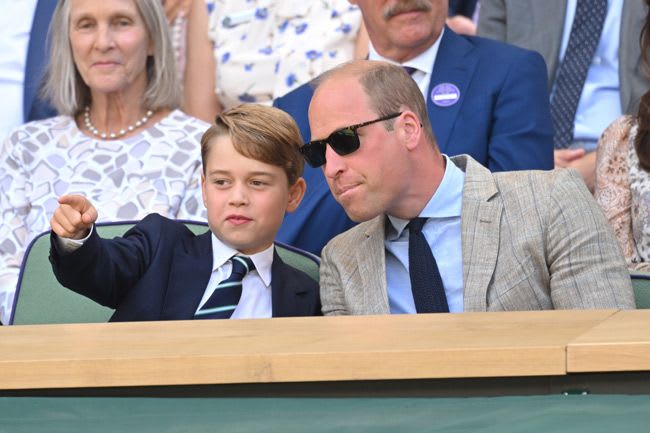 Royal fans adore Prince George’s smart outfits, with many copying his looks on their own children.

In fact, George is so stylish, he was ranked number 49 on GQ‘s “50 Best Dressed Men in Britain” list in 2015 and has also appeared on Tatler‘s best-dressed list.

We absolutely love the fact that the young royal is a fan of dancing.

Prince William previously spoke of George’s love of the hobby at BBC Radio 1’s Teen Awards, revealing to a young dancer: “George is doing dancing as well, he loves it. And my mother always used to dance, she loved dancing. And if it’s something you love, you do what you love. Don’t let anyone else tell you otherwise.”

His cute nickname for the Queen

To us, the Queen is known by her formal titles but to George she’s great-grandma – and he even has his own affectionate name for her.

Speaking in a TV interview for the Queen’s 90th birthday, mum Kate said: “George is only two-and-a-half and he calls her ‘Gan-Gan'”.

George beside his great-grandmother the Queen

He’s a cheeky one

We’ve often spotted George pulling cheeky expressions in public and his dad William has commented on his son’s personality in the past.

The Duke told CNN how George is “a little bit of a rascal, I’ll put it that way. He either reminds me of my brother or me when I was younger, I’m not sure, but he’s doing very well at the moment.”

One of George’s passions is aeroplanes, so perhaps he’ll become a pilot when he’s older?

Back in 2016, the Prince attended the Royal International Air Tattoo, which was his very first royal engagement in the UK. George was led up the ladder of one of the RAF Aerobatic Team’s Red Arrow Hawks by William, and even had the chance to sit in the cockpit.

He asked mother Kate: “Mummy, can I fly the Red Arrow now?”, with William gently telling him, “Not right now.” He is the same height as the Queen

Whilst royal fans were blown away by seeing Prince George, Princess Charlotte, seven, and their cheeky little brother Prince Louis, four, enjoying the jubilee celebrations, they couldn’t help but notice that George is the exact same height as his grandmother, the Queen.

The young Prince was captured next to his 96-year-old ‘Gan Gan’ as they appeared on the balcony of Buckingham Palace during her Platinum Jubilee celebrations. The photo in question, which was posted on the official social media accounts of the royal family, saw the duo chatting side by side, and Her Majesty, even with her bold green hat, looked to be the same height as the young royal. 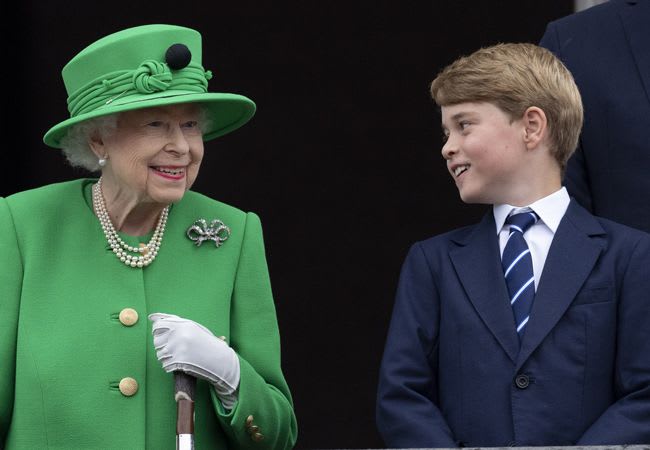 The Queen and her grandson appear to be the same height

He cooks with mum

George is also a keen cook!

In February 2019, Duchess Kate visited the Lavender Primary School in London and Matthew Kleiner-Mann, chief executive of the Ivy Learning Trust, later revealed: “She was telling us how much her children love cooking and how they cook for her,” he revealed.

“They made cheesy pasta the other day. One stirs the flour, one puts the milk and butter in. And they make salads and stuff.” 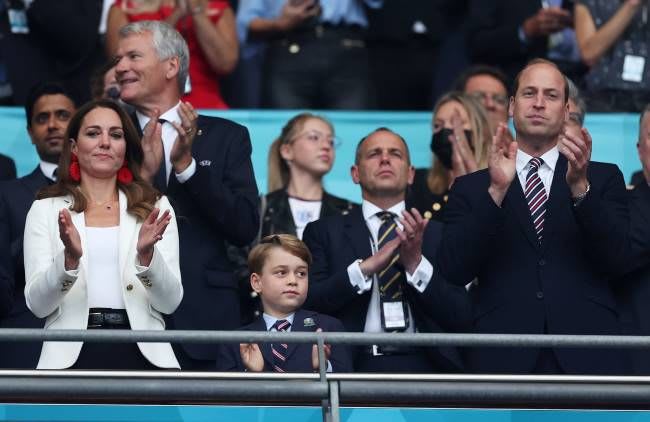 The young royal at the 2020 European Championships final

The young royal is a member of his school’s football team – and appears to support his dad’s favourite football team, Aston Villa. He was noticeably upset when England lost in last year’s rescheduled 2020 European Championships final. When he attended his first Aston Villa game with his father and sister back in October 2019, he melted hearts with his enthusiastic reaction to the team’s win.

The Prince is pretty brave and doesn’t shy away from a thunderstorm.

Duchess Kate once visited a children’s hospital where a boy told her a storm was coming. She replied: “Yes, I know all about those. George likes storms, too!”

Make sure you never miss a ROYAL story! Sign up to our newsletter to get all of our celebrity, royal and lifestyle news delivered directly to your inbox.